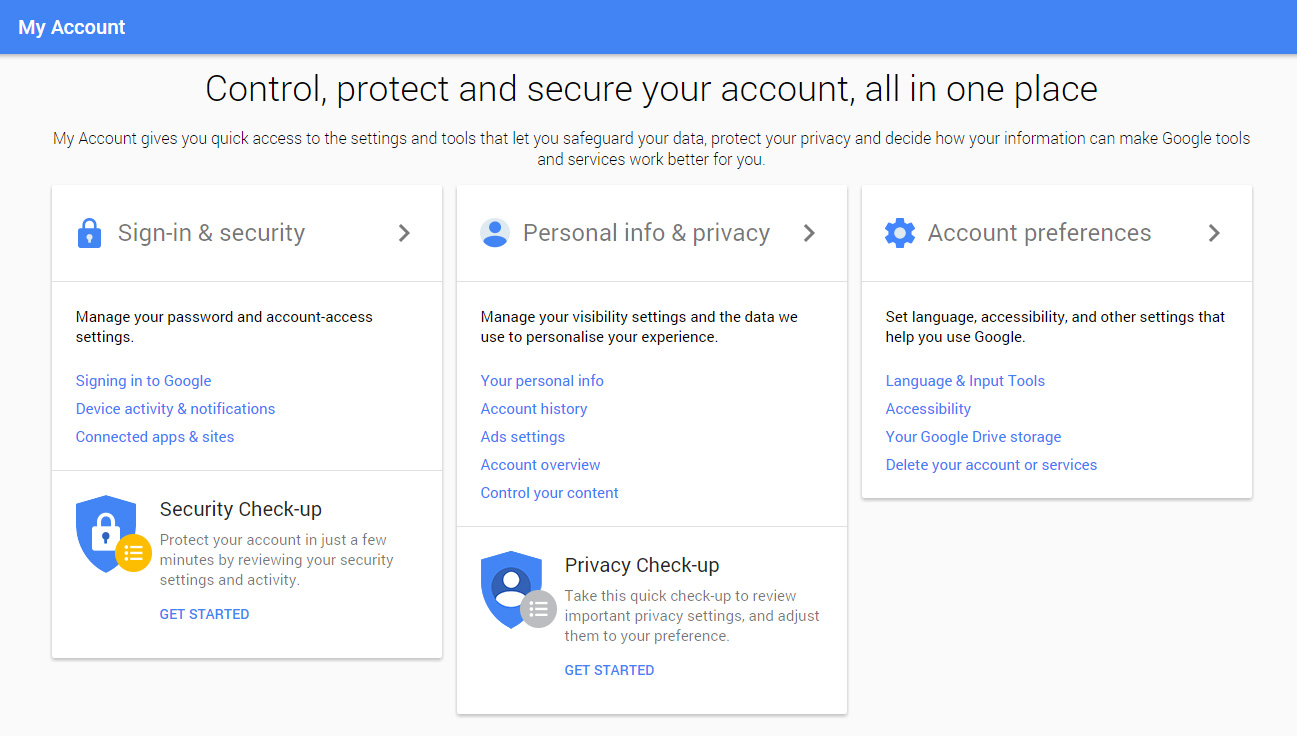 Google has introduced a new privacy and security dashboard designed to make it easier for people to control the data that Google collects about them. The dashboard should make it more intuitive for users to make changes.

The three sections now shown in My Account consist of ‘sign-in and security’ which covers choices about passwords, two-step verification and information about the services and apps which can access a user’s data. ‘Personal info and privacy’ is the next section which offers choices about search and YouTube history, including the ability to control location data, search result personalisation and to delete particular search phrases. The final part of the dashboard, ‘account preferences’, includes general settings as well as the ability for a user to permanently delete themselves from individual Google services.

Google has suggested that it will take users around two and half minutes to check through the options and record their choices on the dashboard page, which will also be shown at the top of search results. The company has created a new set of frequently asked questions relating to the data that it collects and what it uses it for. As well as personalising services, Google also uses a user’s activity on its sites to shows adverts based on a user’s interests which it works out from search queries and other data. Adverts are Google’s largest way of generating revenue and the company made $66bn last year.

Despite the relative transparency of the new page, critics have said that the information is not neutral enough. Some of the descriptions given for each setting are worded in a way that encourages users to turn the setting on rather than leaving them to decide for themselves. There is also a pop up that appears as a user switches off each setting, trying to persuade them to keep it enabled.
In addition, campaign groups such as Privacy International have said that they welcome the new dashboard but it doesn’t tell the complete story about the information that Google collects (for both those who are signed in and non account holders) and the way the information is used.

A survey which was recently released by the Pew Research Center stated that 93% of US adults felt that being in control of their personal information is important, however 50% said they had no control over data while just 9% said they had a lot of control over their data. This is due in part to people not understanding how companies use their data, but also the companies not providing enough options or not explaining the options to users in an obvious enough way.

Both Google and Facebook rely heavily on selling targeted adverts in order to make money, and the ads can only be targeted using user data. Both companies have come under fire from watchdogs, competitors and governments over their use of customer data.
For the last five years Google has come under fire from regulators in the EU and US for privacy breaches that include email contacts being exposed and tracking the Safari browser secretly. The EU is looking to clamp down on the way companies use and store citizens data outside of EU countries, saying that it is not being protected as it should be by law.

Google’s new My Account dashboard could face improvement in the future, but it may encourage other companies to go down the same route and allow users to have more control over their personal data and its collection. Simplified options and an explanation of what the company will use it for will help users to understand more about the ‘what’ and ‘when’ of data collection, and following this they may be happy for the company to record their habits if they feel it is benefitting them too.