HTML5 vs. Flash – A Comparison 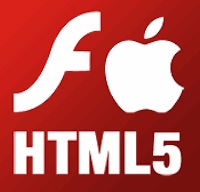 HTML5 is the latest version of HTML, which is a standard used for presenting the contents on web pages. It includes XHTML1, DOM2HTML and the previous version of HTML namely HTML4. Flash on the other hand is used to animate, add video and provide rich internet applications. It won’t be wrong to say that HTML5 provides an alternate for Flash. To follow is a comparison of the two technologies from different aspects and recommendations for their usage.

Flash has been around for over 15 years while HTML5 has just started to be standardized. Flash runs on all major operating systems except Apple’s system i.e iOS. HTML5 has been implemented in most of the browsers but earlier versions of these browsers didn’t support HTML5. Therefore, there are a number of internet users who can’t use HTML5 content on the websites.

Flash has been notorious especially among the Mac and Linux users for its usage of CPU resources when playing videos. HTML5 on the other hand outperforms Flash while running in many of the web browsers. The new version Flash 10.1 has a markedly improved performance but still it can’t beat HTML5 in CPU usage on different platforms.

From a developer’s view point, Flash is much easier to code. It takes more time to develop HTML5. However, Adobe is on the defensive mainly because Apple doesn’t seem to support Flash in its devices for foreseeable future. Flash to HTML5 conversion tool has already been released by Adobe. Moreover, HTML5 is an open source, rendering its development tools to be less costly as compared to Flash’s from Adobe.

It is widely acknowledged that Flash has better quality in terms of resolution and HTML5 doesn’t support webcam for streaming. Developers are finding ways to get around the hurdle of a lack of hardware interactivity of HTML5.

From the above discussion it can be concluded that if you want the application to be compatible with most of the browsers, older and newer alike you should use Flash. It is better to use HTML5 on Apple’s systems and for other sophisticated better performing websites. Small scale development of Flash is costly, primarily because of development tools. For website content that offers different content to users with various network rates Flash is a better choice.

According to some stats most of the popular websites use flash and almost all the enterprise websites do the same. Flash occupies a major portion of video and web gaming as well. But this is largely explained by the late arrival of HTML5. Many popular video websites have started to support HTML5.

Flash and HTML5 have their own area of influence. In the end, it depends on which type of application and what requirements are to be fulfilled by that application. The talk of HTML5 kicking Flash out of contention is rather immature because Flash has other areas of application in addition to web development.