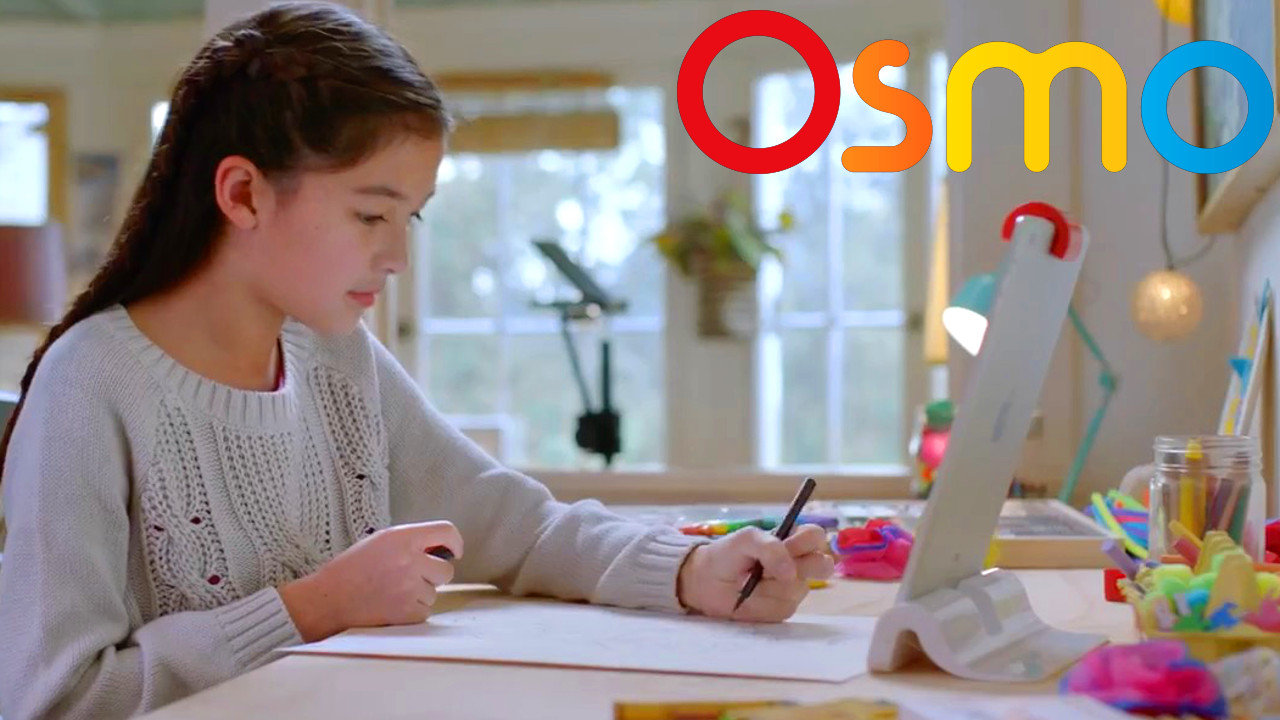 The Osmo reflector ($79.99) is needed for all Osmo’s games and apps, and it consists of an iPad stand and reflective mirrored cap that is placed over the iPad’s camera. This allows the iPad to ‘see’ the table in front of it, then uses intuitive shape recognition as the basis for the apps and games.

The Masterpiece app is free to anyone who already owns the Osmo reflector and it aims to help both children and adults gain confidence in their drawing skills. You can snap a photo of an object, add a photo from your iPad or download an image from the web and store it in an Infinite Library. When you choose an image to draw, you can resize, rotate and move the picture to create your favourite composition on the screen. Osmo’s artificial intelligence then uses AutoLine and AutoShade technology to suggest the lines to draw in order to replicate the image the best.
This computer vision overlay on the screen enables you to place a piece of paper on the table in front of the iPad and trace the shapes suggested by Masterpiece. The app will show an overlay of your own drawing on the screen, guided by your hand. Instead of tracing something directly by placing a piece of paper on top of an image, you’re using your own awareness and co-ordination to trace it from screen to paper.

After the drawing is complete, you have your own physical masterpiece and children will love to see their creations stuck on the wall or fridge. There’s also a Video Capture option on the Osmo Masterpiece which creates a shareable video overlay of how you drew the lines, and you can share your finished digital drawing too.

The Osmo accessory is currently being used in over 2,000 schools in the US and, while the Osmo game apps are designed for children, there’s no reason why Masterpiece should be used by children alone. Anyone who has difficulty drawing and would like to improve their dexterity can use Osmo to help them learn new artistic skills. The ability to create an infinite number of compositions from a mixture of found objects and images can also give rise to some interesting, abstract results for those who would rather create more surreal or imaginative drawings.

Osmo, a silicone valley startup who were named as having one of the best inventions of 2014 by Time magazine and who have now sold more than 100,000 units, have tapped into parent’s worry that their children are becoming immersed in smartphone and computers and losing touch with creativity in the real world.

Pramod Sharma, Osmo’s Chief Executive, has told of how children enjoy drawing imaginatively but by the age of around 10 they have lost confidence in their abilities. The rigid system of learning in order to pass exams in schools means that art can be pushed to the bottom of the curriculum and children are no longer encourage to express themselves creatively. By using the Osmo Masterpiece either at home or school and by eventually realising they no longer need to trace the lines suggested by Osmo exactly, children can gain the ability to copy what they see onto paper, either in the real world or in their imagination, and this goes for adults using the app using the app too.
The Osmo package including masterpiece has been  likened to an ‘HP Sprout for children’ and, while there is a cost difference of around $1,800 for HP’s blended reality computer, the basic principles of using virtual applications to enhance physical activities are reasonably similar.

Osmo’s clever reflector along with their apps to date have helped them secure over $14.5 million in funding. Osmo’s Newton game uses physical line drawing to create the basis for a simple real-time maze that deflects balls on the iPad’s screen, Words uses letter recognition technology to create an interactive hangman game with physical letter blocks, and Tangram uses shape recognition to help children solve shape based puzzles.

Osmo’s newest app creation allows the user to learn to draw confidently through virtual tracing and artificial recognition technology, in order to help them gain drawing skills and belief in their own artistic abilities.