With the Mac growing in popularity everyday due to it’s unparalleled hardware, ever improving software and better synchronisation with the behemoths that are the iPad and the iPhone, it is not surprising that more and more people are wondering what their Mac can actually do.

There are many things your Mac can do that I’m sure you didn’t realise it could. Therefore we are going to give you ten little tricks that you can do with your Mac that will either increase productivity, speed up your workflow or just be something you can play around with one afternoon. Here are 10 Mac secrets you’ll want to know:

This is something some people may already know but one that can never really be underestimated when it comes to increasing your knowledge. If you see a word you don’t understand or what to use a different word in an essay or piece of long-form text because you’ve used it too much already, if you tap on the word with three fingers on the trackpad then it’ll bring up a little drop-down that shows you definitions and synonyms for that word. You can also use this feature to find phrases, but this is brings up results far less often. This feature can be used in anything that uses real text as opposed to maybe images to represent their text. This means it can be used in Web browsers, text documents, emails and many other applications. It’s very useful and very helpful.

We are yet to see Siri on the Mac (however we think we will soon) but you can still use your voice within the advanced operating system. Mac has an option to say what you want typed, it is incredibly accurate and really handy if you can’t or don’t want to use the keyboard for many different reasons. 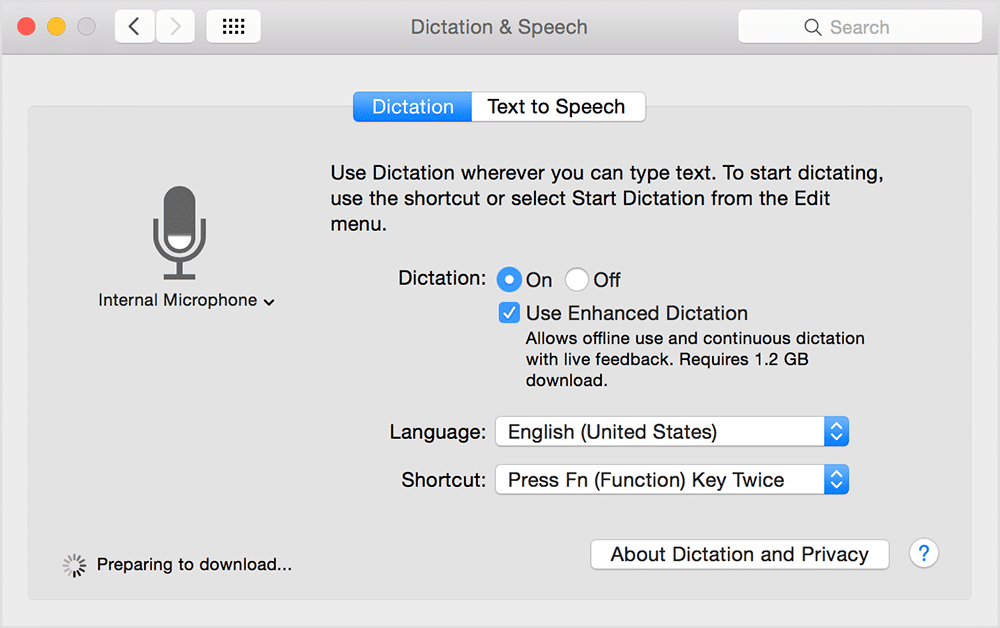 To access this function, all you need do is double tap the (fn) button which will either bring up the option to enable dictation if you haven’t already to will simply bring up the dictation icon and allow you to start speaking straight away. When you’re finished speaking, you just hit the (fn) key once again and it will stop listening for your voice. Recently Apple added the option for offline support which works 95% of the time as opposed to maybe the 98% when you’re connected to the internet but they’re both still not only brilliantly fun to use, but convenient sometimes too.

One of our favourite features of using a Mac here at Geekszine is the ability to take a screenshot as we require many to write these amazing articles. However, sometimes taking a massive screenshot of the whole of your Mac’s display isn’t exactly what we want. We want to be able to select a specific portion of the page to cut out any unnecessary information or clutter we don’t want. 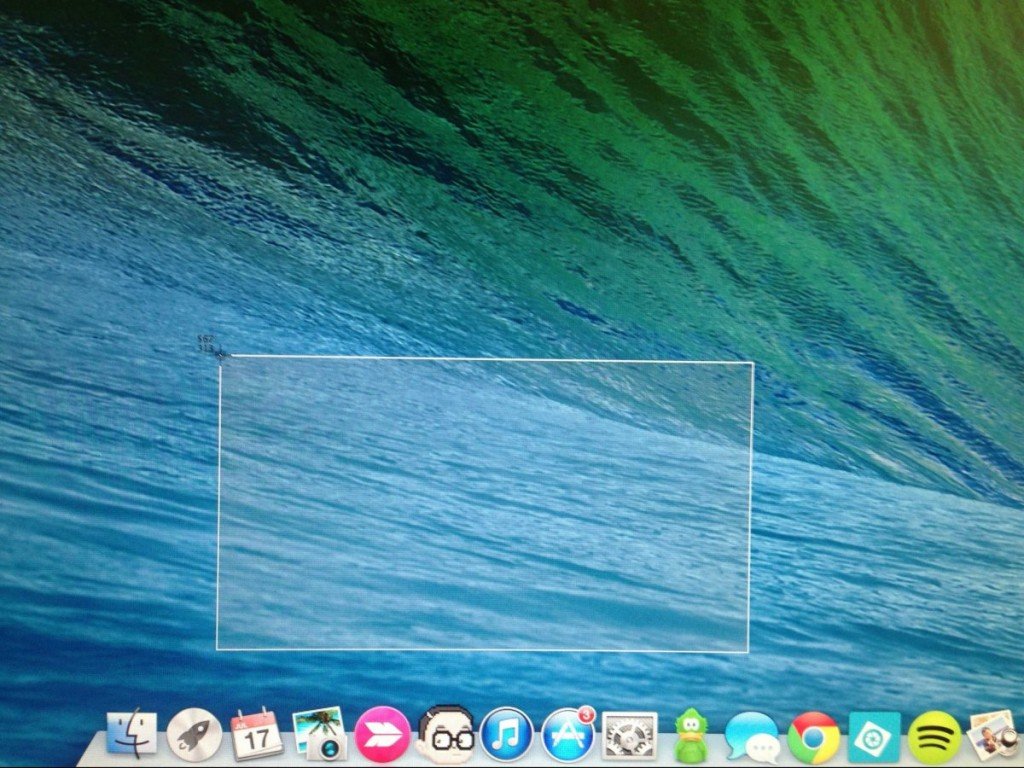 To do this, you can press shift+cmd+4, this will bring up a little ‘+’ icon that will allow you to then drag and draw a specific area of the screen out which it will then screenshot and save it to the desktop instantly. This is incredibly handy in more situations than you can ever understand and is really the only way to screenshot for us here.

4. Record/View your iOS8 Device on your Mac

iOS8 brought many new features with it that helped it work with Macs better than ever, forever enticing iPhone users to get Macs and Mac users to get iPhones. One feature that it brought was the ability to not only view, but record for iOS screen straight from your Mac via the application Quicktime.

To do this, you simple plug in your iOS device via the lightnight conecctor into the USB port. You then open up Quicktime and navigate to File and New Movie Recording, then select your iOS8 device from the drop-down list next to the record button. It’s as easy as that!

Some of the more basic examples are cmd+space to open Spotlight, cmd+Q to quit an application, cmd+S to save a document and cmd+option+D to show/hide the dock. There are plenty of shortcuts and we’d recommend just playing around with them to see if any make your productivity with a Mac quicker.

6. The Power of Spotlight

So Spotlight received a brilliant update when Yosemite was brought into play last year and with it, it brought not only a new suer interface but some new features.

Some of the features you can do with Spotlight are: view Wikipedia articles on people, places or some objects; calculate sums; get an instant currency conversion and many more exciting features. Mac are working to surely make Spotlight as the brilliant Alfred which still offers far more functionality.

7. Preview Any File with Spacebar 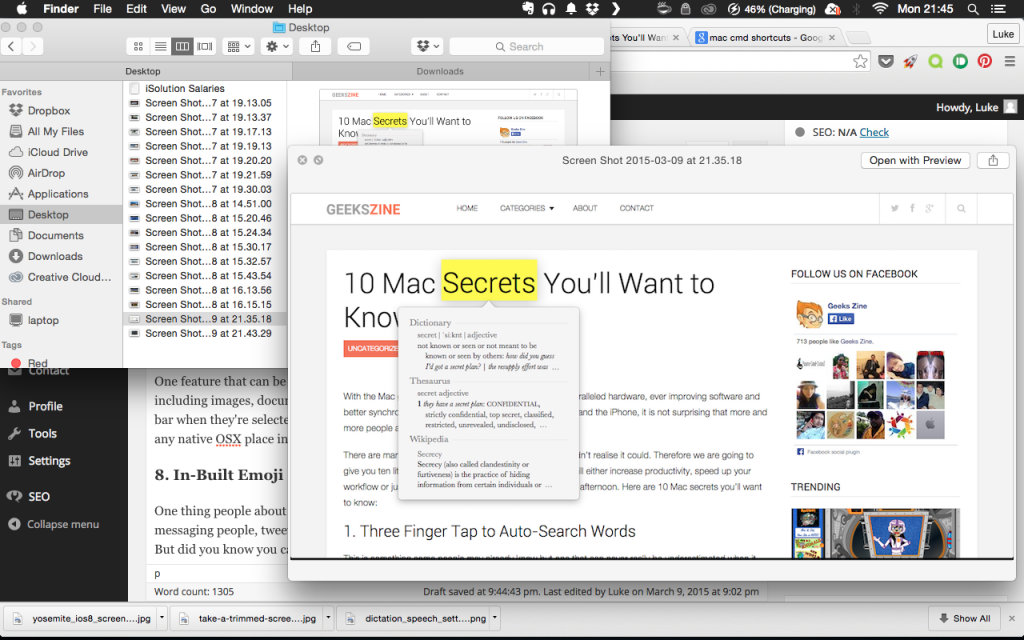 One feature that can be very useful and speeds up a lot of time when it comes to viewing most files including images, documents, excel sheets and more is the ability to quickly view them by hitting the space bar when they’re selected. What’s great is that this can be done in either Finder, on the desktop or really any native OSX place in which you can highlight a file.

One thing people about their iPhones is the many silly emojis you can have fun with when it comes to messaging people, tweeting, setting status’ and generally anywhere you can type (probably not in your CV). But did you know you can also insert Emoji into your text on your Mac with a simple keyboard shortcut. 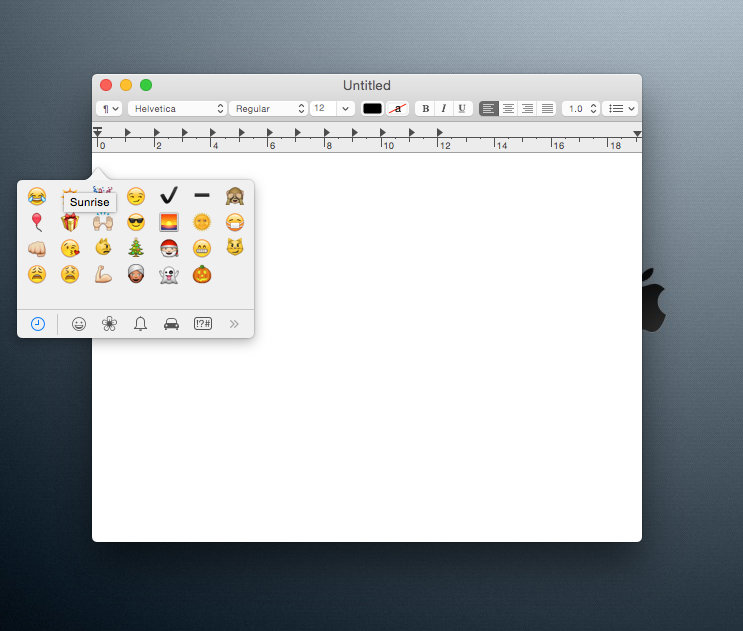 The shortcut is ctrl+cmd+space and this will bring up a little box full of Emoji which you can navigate through and then tap on one to insert it into the text field where your curser currently is. The only slight problem is that once you’ve inserted one Emoji it closes instantly. So no spamming people with laughing faces to express how very funny their joke was in iMessage.

9. Use Mission Control to Navigate around Apps

One of the areas that Apple try and push is productivity and so with Macs they have a great shortcut feature called Mission Control that allows you to view all the applications you currently open with a live view. It’s a simply brilliant feature that is a really satisfying way to navigate your applications. 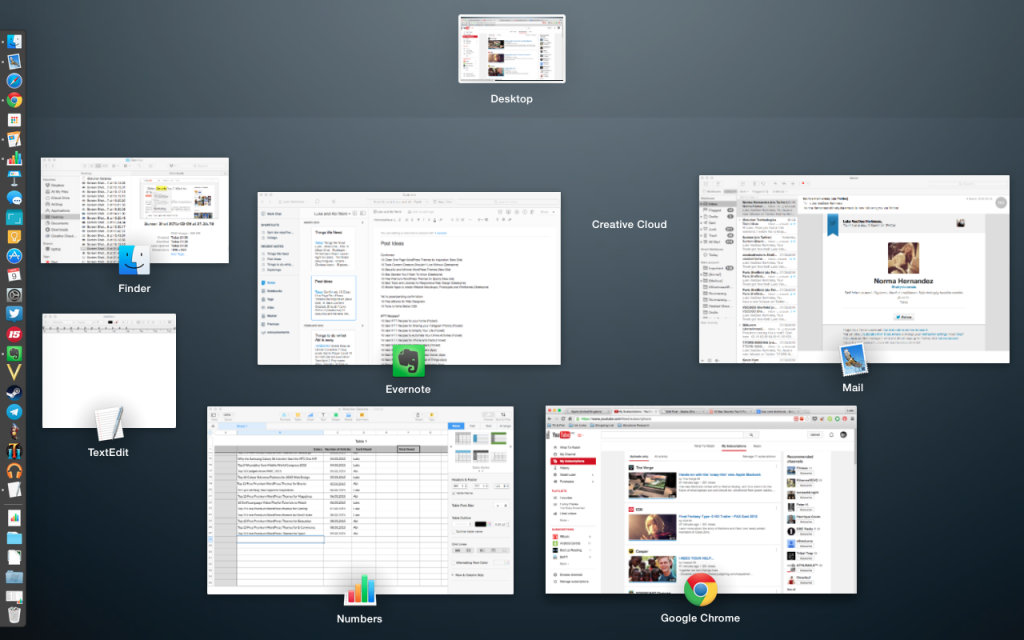 If you own an Apple laptop with a trackpad, to access this feature swipe up with four fingers to access this, however if you don’t have a trackpad or aren’t into quick gestures, you can press ctrl+up arrow. It’s very relieving to not be able to find an app and to just swipe up and be able to see everything you’ve got open.

10. Widgets in the Notification Center

The Notification Center has become more than just a notification center with the introduction of Yosemite and has become a more powerful area more like it’s iOS counterpart. Not only can you view the date, calendar events and tweet from your notification shade but you can download widgets for it too. Apple supply some default widgets such as Stocks, Reminders, Calculator and more. 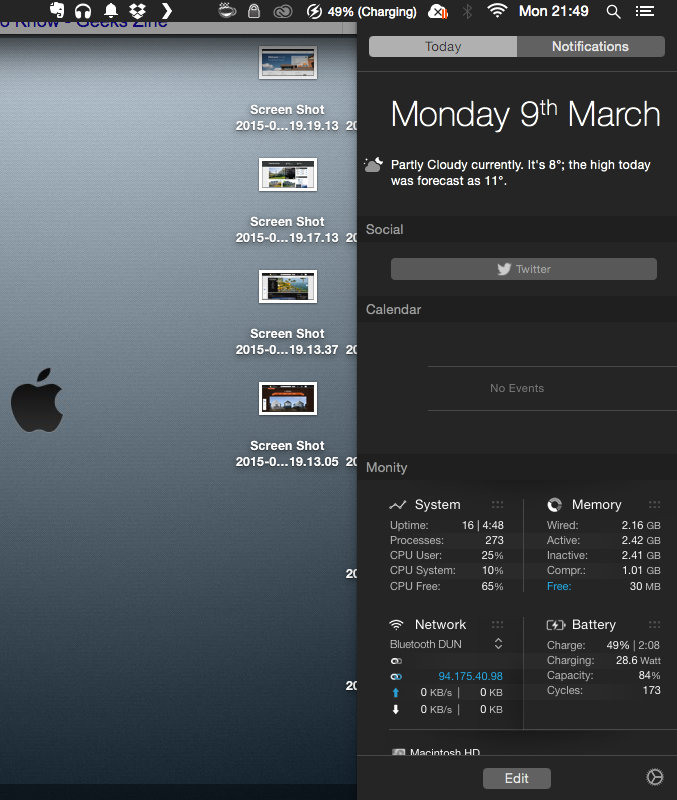 However, if you want to download more, there are plenty of options within the App Store that include widgets. If you want to add in widgets into the notification center you can hit the ‘edit’ button at the bottom which opens up a list of available widgets that you can add into the list of widgets. You can then move the widgets around simply by dragging their title up or down.