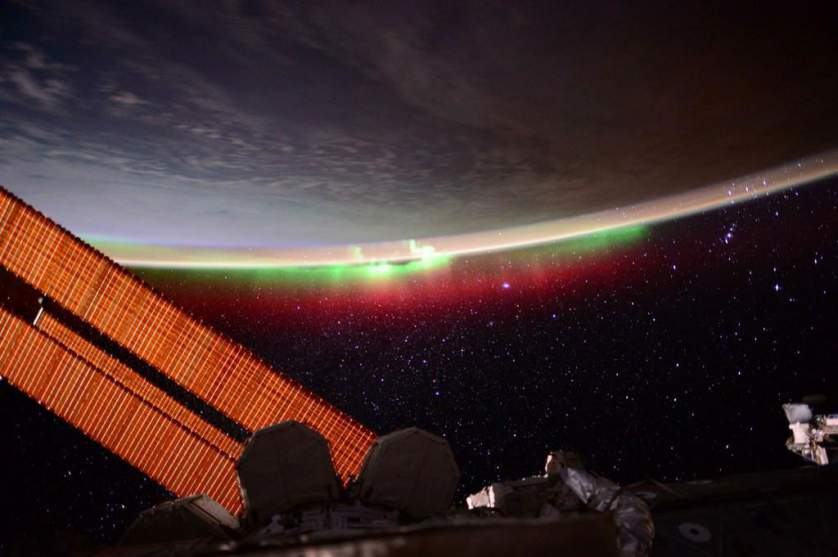 Day 92. #Aurora is back in town. Good night from @space_station! #YearInSpace Huge solar storms are set to continue battering earth for the next few weeks. They could disrupt GPS signals and power grids, but auroras could be seen.

Strong shots of magnetic plasma are being forced out from the sun and are traveling at a much faster speed than usual according to the US National Oceanic and Atmospheric Administration (NOAA). This has caused the biggest solar storms this year, and they may even be larger than ones experienced in September 2005.

Solar flares are intense variations of the sun’s brightness that occur very quickly and sometimes without warning. Magnetic energy is built up in the sun’s atmosphere, and the flares occur when the energy is released all together at once. The resulting explosion of radiation contains all types including radio waves and gamma rays, and this is what creates solar storms. When X rays and ultraviolet rays from the solar storm hit the atmosphere of earth, they change the reflective properties and can even change the properties of some of the molecules in the atmosphere.

Day 91. Brilliance to mark the end of the week with how it began. Good night from @space_station! #YearInSpace pic.twitter.com/aeXzgjBF0Q

Strong solar weather can bring auroras with it, spectacular light shows that appear in the earth’s atmosphere. These have been seen over the US at night and can also be seen from space. US astronaut Scott Kelly has shared images of the auroras from the International Space Station, saying he’d never seen such a spectacle as the red lights shining over the earth. Auroras are caused by solar storms interacting with the top levels of the atmosphere, but the red colour is caused by particularly strong solar plasma activity in the highest part of the atmosphere.

Intense solar storms can disrupt GPS navigation systems, power grids and systems that rely on radio communications. According to the NOAA space weather physicist Doug Biesecker, there have been no reports of damage yet. The electrical grid may see fluctuations in current, but these will only cause problems if they are particularly strong because the grids have been built to be able to deal with small and medium sized fluctuations.

When solar storms hit the earth’s atmosphere and change the reflection of the earth as well as changing the properties of some molecules, it can mean that GPS signals and radio waves are disrupted. This is because long distance communication relies on the atmosphere being able to reflect signals between transmitters and receivers. In addition, some of the molecules can be made to absorb radio signals instead of reflecting them during a solar storm, meaning the signals disappear completely.

The current solar flares being emitted from the sun are M-class which means they are medium sized, according to the NASA Solar Dynamics Observatory. The scale includes A, B, C, M and X, where X is the biggest and strongest solar flares. The flares have been named as coronal mass ejection (CME) and there have been several large ones in a short space of time, meaning that billions of tons of solar atmospheric material have been hitting our atmosphere during this time. The flares take between two and five days to reach earth, and cause beautiful auroras in more southern areas where they can’t normally be seen. There have been reports of aurora bd borealis in Minnesota, South Dakota, Virginia, New Hampshire and Wyoming in the US. In the past, mid sized solar storms have caused auroras to be seen as far south as New York and Idaho.

Space weather forecasters don’t have a reliable way of predicting how fierce a solar storm will be until it reaches earth, which could pose a problem for the future as solar storms may become stronger and threaten the earth’s infrastructure. A new paper published by NASA has shown a plan which could be used to predict the magnetic vectors of CMEs, which would help scientists and space forecasters to predict how strong a solar flare will be as well as where it is headed. This will be useful for the air industry, power industry and the public too, who may need to watch out for disrupted mobile phone or GPS signals when the biggest solar storms hit the atmosphere of the Earth.