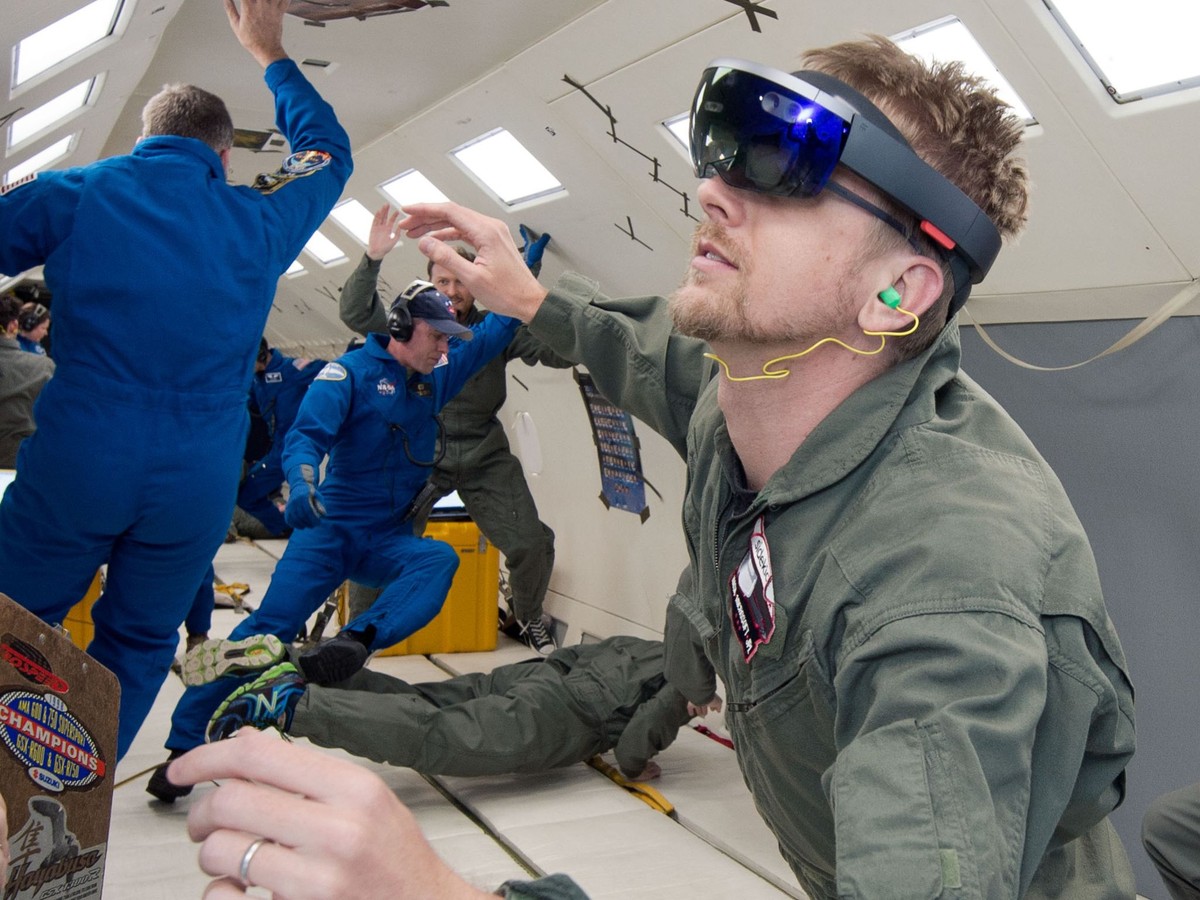 NASA and Microsoft are working together in a bid to take the Hololens augmented reality headset into space. It’s planned that the headset will help astronauts to perform hard tasks while they’re in orbit at the International Space Station.

The Microsoft Hololens headset will allow NASA to insert extra information in the spacecraft. This could include instructions on what buttons to press while performing a task or even let people on earth see what life is like from the perspective of an astronaut. The first pair of devices are already making their way to the space station on board a SpaceX planned resupply mission.

The Hololens is an augmented reality headset designed by Microsoft as part of the Windows 10 launch. The headset displays virtual images and information on top of the view of the real world and includes cameras and sensors. The project that sees the headsets heading into space has been called Sidekick and will enable virtual aid to be given to the men and women in space.

Sam Scimemi, director of the ISS program, has said that the Hololens is a cutting edge technology and it could help ‘drive future exploration’ as well as providing new skills to the people on the International Space Station who are conducting science experiments. Scimemi went on to say “This new technology could also empower future explorers requiring greater autonomy on the journey to Mars”. A software in development called OnSight will help with future Mars missions, although it may be a while before we get to see the software in use.

The headsets have already been tested on the Weightless Wonder C9 jet owned by NASA. The plane simulates microgravity environments such as that of the space station by going into free fall.

Two modes of the Hololens headset will be used while in space- Remote Expert Mode and Procedure Mode. Remote Expert Mode allows the user to connect with operators on earth via Skype, allowing them to see things through the eyes of the astronaut. They can give instructions verbally as well as creating diagrams or drawings which appear in the space that the astronaut is looking at. Procedure Mode allows illustrations to be seen on top of objects in the space station which could help to reduce training requirements while allowing astronauts to work on projects in deep space where contact with ground control might not be possible.

When the Hololens devices reach the International Space Station shortly, astronauts will turn them on and check that they work properly in space. NASA has said that by the end of the year the astronauts will have begun to use Sidekick functionality. The space agency is also planning to use the devices as part of a trip to Mars in the future, before the possibility of a human reaching the planets surface. Things that once seemed impossible have been made plausible by the Hololens, thanks in part to the ability to pre program the device. This will make it useful for possible missions further than a human astronaut has ventured before, as communications face delays of hours and so instructions or help would be impractical to receive from mission control on the ground.

Microsoft CEO Satya Nadella has called the announcement of the Sidekick project “unbelievably cool” and there will be many at both Microsoft and NASA who think the same. Microsoft has not yet released the Hololens to the public and the device was only announced earlier this year when the company revealed the details of new operating system Windows 10. It isn’t yet known how much the headset will cost when it becomes available, but the draw of owning technology that is used in new space missions is likely to create a hyped launch for the Hololens.

Project Sidekick has been launched as a way to test the boundaries of holographic computing, with a device that has been described as being about the way people ‘create, connect and explore’. Sidekick is also planned to enter the deep ocean- astronauts and engineers will be testing the technology at Aquarius, the only undersea research station on the globe for two weeks. This will be part of an expedition in July named the NASA Extreme Environment Missions Operation 20.