Illustrator Or Photoshop – Confused About Which One To Choose? 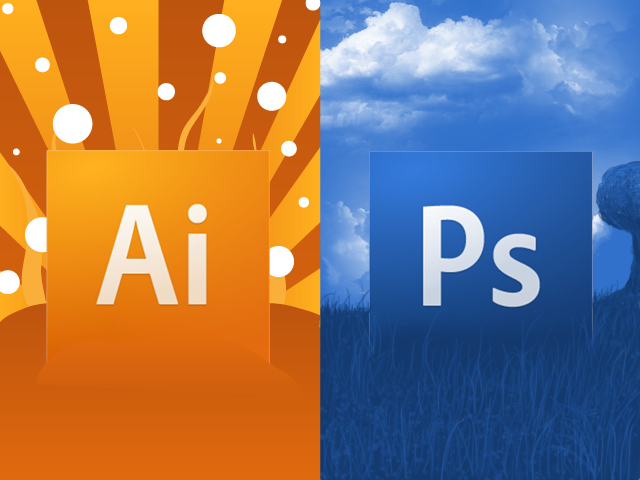 Although both Photoshop and Illustrator are offered by the same company that is Adobe but their nature of implementation differs from person to person as well as the area where applied. Both of the graphic software are used by graphic and web designers, artists, animators and many others to perform different drawing, designing and illustration tasks.

A casual look at both of these programs will make you feel that they serve the same purpose but that is not the case. They are entirely of different genre. Some tasks are performed better by one and others by the latter. They employ different approaches for their operation. It is no use to debate which is better because the applications are different. To follow are some of the most important features that differentiate them one from the other and help you decide which one to apply where. Photoshop handles its files in the form of raster images. Illustrator, on the other hand is a vector based drawing program. Although Photoshop can create vector objects like typography but it saves them raster format. In Photoshop the objective is to play with pixels while in Illustrator, bezier lines are connected through anchor points which can later be modified, thus giving the users the opportunity to transform the design whenever they desire to.

Photoshop, as the name implies is more suited to photographers where they can change the levels, brightness, contrast, color balance, threshold and exposure of their photography etc. However its application is not limited to photography only and one can find an ocean of areas where it can be utilized. Graphic designers/ artists/ illustrators require Illustrator most of the times to create artwork for their projects such as logo design, creating and editing illustrations, web designing and the list goes on. Photoshop is also preferred for creating user interface components like buttons, icons, and thumbnails as well as a very important tool for web designing. Graphics designed by Illustrator can be used on print, websites and mobile apps with equal effectiveness.

Both programs provide powerful tools for modification and lets the user bring his/her creativity to life. Like every drawing begins from a dot, both the software can be manipulated to the best for creating millions of things. In Photoshop you might need a base image to work with (restricted to just beginners though). In Illustrator you can start from scratch to harness your creative instincts, however, most of the artists love to draw by hand and then start working on it using the software. Most of the hobbyists and a lot of professionals modify existing ideas for quick completion of projects. Photoshop even supports animation, thus adding to the delight of the designers aka animators. Illustrator helps in drawing illustrations for the animation, but the drawings/illustrations have to be exported to the other software for bringing them to life.

Photoshop has a slight edge when we note that it can edit vector images. Probably this is the reason the company has set a higher price for Photoshop than Illustrator. But again it is emphasized that if you are designing some logo then saving in a vector based format is the way to go. This is because vector based images can be stretched and contracted without losing the symmetry. Both of the applications allow users to add plug-ins to the software. Some of them are provided by Adobe but mostly they are created by third parties. Plug-ins enhance the functionality of the program through color correction and 3D effects etc. Some plug-ins add automation in the usability. Therefore, Photoshop and Illustrator both tend to be more flexible with the added benefit of plug-ins. Although professionally this has no significance but commonly people use Photoshop as a slang term when it comes to editing the images with good or bad intentions. The word Illustrator is not that common in general public. When it comes to creativity, both play their own role, but it’s totally in the hands of the user as to how they use their skills to the best.

Many of the professionals working in the industry prefer to have both programs and combine their capabilities to get the final result. The use of both the software can be best utilized in poster designing, magazine designing etc. They belong to different sets of application areas and can’t be compared in general. So when it comes to choosing one from the two, don’t be confused, think of what you need in the end and make your choice or may be use the both in unison!