Microsoft has revealed a new Surface Hub computer which measures 84 inches wide and has been designed for work creativity and meetings.

The Surface Hub has been created to provide a replacement for meeting room equipment such as projectors, webcams, speakerphones and cables. At the announcement at the Westin Hotel, Manhattan, the computer was turned on with a tap on the touchscreen, which ignited the cameras, microphones and whiteboard.

The price of the Surface Hub is prohibitive- the 84 inch model costs $19,999 and the 55 inch model costs $6,999, more than a lot of small offices could afford. It’s likely that Microsoft will be looking towards large companies, corporations and senior managers when pitching this new machine.

Mike Anguilo, corporate vice president of Microsoft devices, has said that 54% of all meetings have at least one person on a call, and that person will lose interest within 20 minutes as they find it difficult to hear what’s going on in the meeting room.

The Surface Hub has a number of sensors that help to make the meeting accessible for all, including infrared, imaging and depth sensors. Two wide angle HD cameras on each side of the screen automatically switch angles as the person giving a presentation turns. There are microphones that provide concentrated voice detection for each participant and voice detection algorithms work to remove background noises.

The Surface Hub runs Windows 10 and provides an easy to use platform for doing things such as starting Skype meetings and sharing files. It is compatible with inkback and toucback to allow content sharing and changing on multiple computers and small devices. In addition the virtual ‘ink’ used with the rechargeable pen for the Surface Hub has been designed to feel like real ink and allows two people to use the ‘ink’ at the same time.

The Surface Hub is the largest capacitive touchscreen on the market and can detect over 100 touches on the screen simultaneously. The computer has been called groundbreaking and houses all of the sensors needed for a large meeting. Large touchscreens can be subject to freezing and crashing, but Microsoft was able to remove these problems through its acquisition of Perceptive Pixel. In 2012 Microsoft bought the company which created the Magic Wall used on CNN- a large touchscreen which allows reporters to zoom in on maps by pinching.

Aguilo says that because meetings are now based on live data, the Surface Hub could provide a tool that lets you zoom in on data or a drawing. Microsoft have been in contact with a Chicago law company that wants to use the Hub to play videos of crime scenes in courtrooms and be able to draw circles around important parts of the scene. 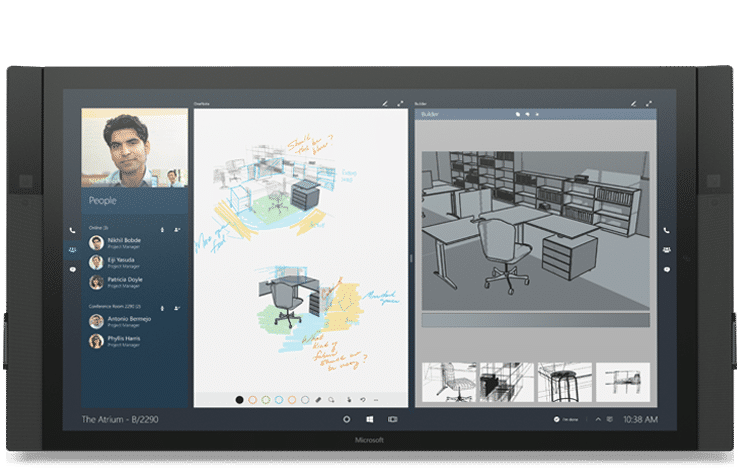 Microsoft has other ideas for the Surface Hub beyond meetings. The company is hoping that the computer will create a social hub in the workplace, allowing workers to brainstorm and work together using the 4K resolution screen. The majority of devices created recently have been more geared towards personal computing, such as tablets and smart watches, but the Surface Hub looks to change that by providing a device on which people can work together at the same time.

While the Hub won’t be appropriate for all sectors, there will be some that embrace it straight away- designers and engineers are likely to be the first users of this technology, but it may take time for other types of companies to catch onto the idea.

Interactive whiteboards have been used in schools and universities for years, but a flat touch screen computer would provide much more interaction and value. However, the price of the Surface Hub is likely to be unaffordable to most educational institutions and so the device will be restricted to business use.

Microsoft will start to take pre orders for the Surface Hub on 1st July. In September, the computer will start to be delivered to more than 24 countries from a factory based in Wilsonville, Oregon. While it’s unlikely that you’ll be buying one for your home or finding one on the wall of your small office, people who work at large companies may start to see Surface Hubs arriving over the next 12 months.