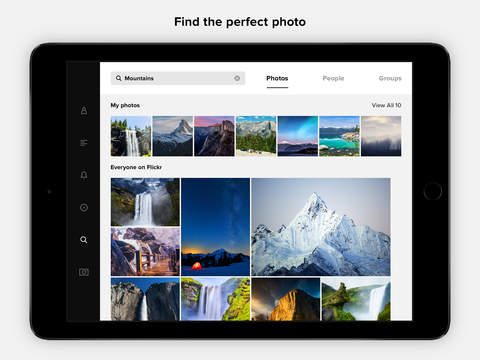 Flickr received a massive update the other day to both it’s service in general and its mobile applications. In general, Flickr has been given an IQ boost, gaining some features that take it into a whole new level when it comes to image organisation. There’s no doubt that this is what Yahoo! are trying to with the service, they’re competing with the likes of Google+ and DropBox to be your go-to place for uploading your photos.

Flickr already offers up to 1,000GB Free storage when it comes to uploading your photos which is a great offer to out-do the rest of the competition offering different storage options based on their respective additional features. That’s the thing, with these other sites, their storage options are limited by the fact that users will be uploading other forms of media and so it’s best to therefore take advantage of their need for more data, however with Flickr, images are their only want and desire.

With Yahoo!’s Flickr’s new features and massively updated applications, we wanted to highlight the best features that have come around this time. We’ve collected the four main things you should look for in the all new Flickr. The Camera Roll in Flickr’s update has been given a massive boost when it comes to intelligence, sorting and more. It’s probably the best place on the web right now to view, find and search all your images. You can now sort your images by date or use a new “magic view” feature that will automatically sort your photographs into clever categories. For example, it can put them into a category of only black and white images, images of landscapes, images that are screenshots and images that include animals. It does this via some clever image recognition software that Flickr have produced. The intelligent software will automatically sort your photos into up to 60 different categories to make it easier to sort your photos. Using the aforementioned improved image recognition also improves the search capabilities of Flickr with a more advanced and specific allowance when you search now. For example, you can search for “black and white” images, “dog” images or other key terms that the image recognition software can recognise. For example, “Look for photos of the London Eye to find the giant Ferris wheel, you’ll no longer find countless photos of eyes taken in London,” Flickr’s head of engineering, Time Miller, wrote on his Tumblr post. “Instead, our new advanced search algorithms understand your intent and bring you higher quality results time after time.”

This improves your search results within Flickr ten-fold, not only making it easier to find what you’re looking for, but being able to search within a bit more detail also. One thing that Google brought into their Google+ app a couple of years ago now is the ability to auto-upload your images to the web. This was both a blessing and a curse, it took out the need to remember to go home and upload your images somewhere online to collate them, but it also meant you had a bunch of blurry shots uploaded to Google+ that you didn’t want there. Since then, Google+ has worked hard on technologies allowing the website to compile the best images, remove blurry images, auto-enhance and remove red-eye and all sorts. On top of that, creating stories of your days out, creating auto-awesome GIFs for you too and more.

Flickr has no implemented this technology into their mobile applications also, making it another great tool for collating all your photos. It doesn’t quite yet have the ability to select the best and show you those, however we wouldn’t be surprised to see this become a thing with the new facial recognition technology and “magic view” software. Flickr has updated its slew of mobile applications. The Android, iPhone and iPad applications have all received a great update making them feel snappier, more suited to their screen size and more importantly, gives them all more synergy between applications making them all  feel a little bit more like the website itself.

Finally, Flickr have also added uploading tools for Windows and Mac to get those images off your computer onto your Flickr account finally. These uploads permit uploading up to 500,000 photos to once account at once. A number we’re sure not many people are going to hit. This is also a great way to take advantage of the aforementioned 1,000GB of free storage.