Top 10 Code Editors You Should Try 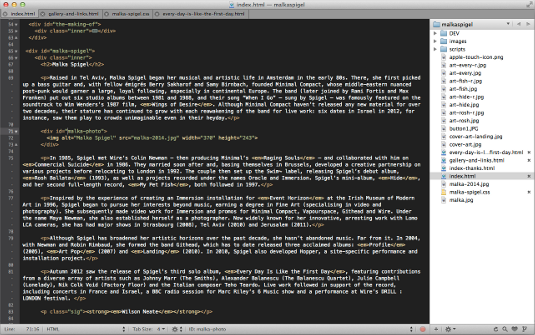 NotePad++ is one of the oldest text editors on Windows and has a whiff of nostalgia for any long-term website coders. However, there’s no doubt that the application deserves a place on this list because, simply put, it can still compete with the best of them. It’s a completely free app and yet still very capable, despite the odd colour scheme, it offers plenty of features even some paid offerings don’t have. Plus it has the nice option to edit the user interface to your heart’s content. CoffeeCup Free is the free version of a the full version and as a result is missing some features, but it still a very capable and good code editor to use. It’s the perfect code editor for beginners as it offers a simple user interface. CoffeeCup offers a niceS-Drive feature that allows you to upload your page and they’ll host it for free. BBEdit is a true veteran in the code editing world having been around for over 20 years now. The interface hasn’t quite kept the pace with other modern Mac apps, there’s a huge amount of power hidden behind it. The app is scriptable, fast, configurable, has syntax highlighting for multiple languages and support for version control. The app has received some updates recently that have added handy text suggestions attempting to match strings from anywhere in the current document. Coda is a truly modern app for Mac for editing code. It boasts the attention to detail that only comes from a designer’s eye and is specifically designed for web designers and developers. Coda 2 was a big update and added a lot of features that not only make the experience better but make the app more enjoyable to use including code folding, code focus, excellent new clips and a built in MySQL editor. Brackets is a new text editor on the market developed by Adobe. The editor itself is actually created using code that builds the web and the developers say that if your can code in Brackets then you can code on Brackets too. In other words, although you initially get a simple, usable editor, seasoned programmers should be able to hack it to their liking. Sublime is a great option for everyone as it is available across all of the three main desktop platforms. It offers plenty of power in it’s general-purpose body text editor form. It’s a great choice for those that love their keyboard shortcuts as it offers many powerful ones for you to increase the speed of your work flow using tools to navigate a document, make multiple selections, filter the file and quickly make edits. Sublime has an odd offering in which it can be downloaded and evaluated for free, but must be purchased for continued use. Textmate and Sublime text look like a similar pairing and offer a similar feature-set also. For a long period, Textmate was the go-to code editor on Mac as it offered a very native experience and was built purposefully for the platform. However, recently Textmate hit a 2.0 preview which is avilable to download and the source has been released for users to tinker with. However, it is unsure when an official 2.0 will land and so we’d take caution with this one! Vim is the go-to text editor for those that prefer to feel more like a veteren when it comes to editing code. Vim has a steeper learning curve than the other names on this list and as a result is for those that are very techie or are looking for something more powerful to play with. You’ll find lots of options such as flexible tools, customisation and macros and efficiency-oriented commands. Atom, created by the well-known GitHub, that has become the code storage and development site of choice worldwide, is obviously going to stir some interest. Dubbed “a hackable text editor for the 21st Century” it has plenty of options and features if you wish to use them but is intended to be simple to use out of the box. Bluefish is brilliant for designers as it offers friendly tools and options for such. Bluefish offers plenty of features and some of their best is syntax highlighting, code folding, a powerful search and replace tools and autocompletion. Bluefish also supports document templates; has wizards to add CSS, forms, tables, forms, audio and video objects; and quick tag editing and easy previewing of the current document.