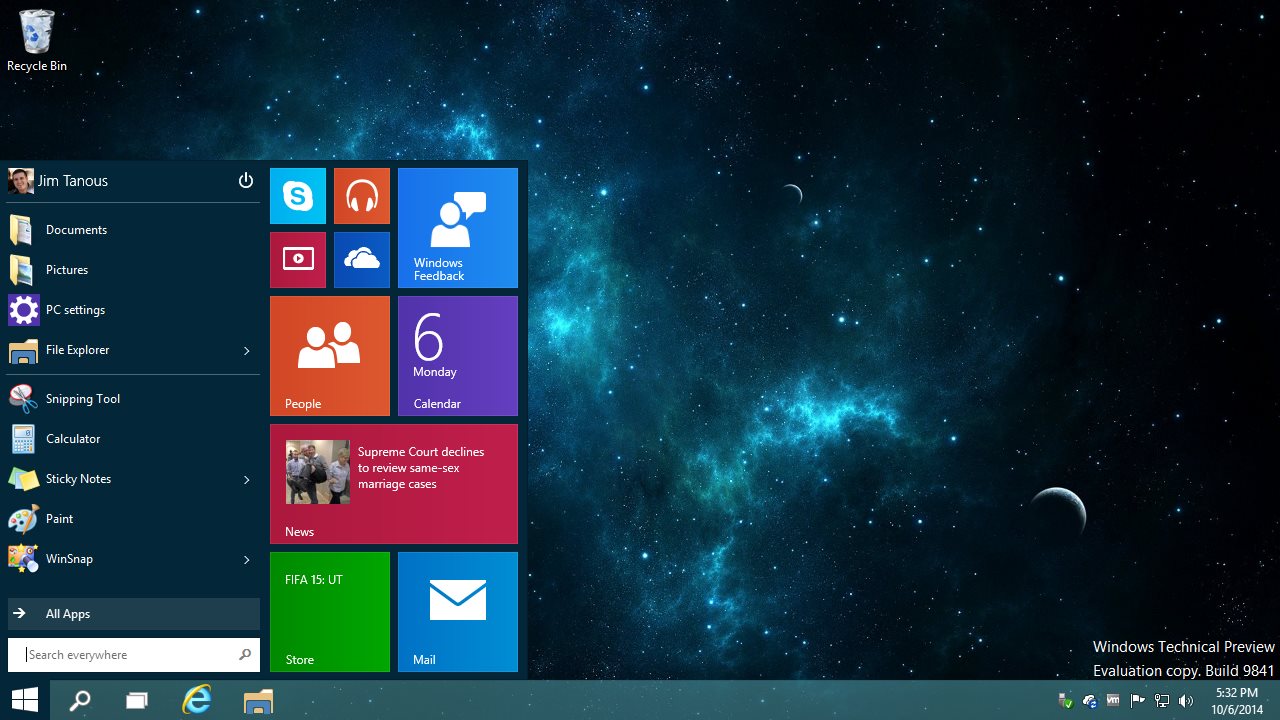 It’s no secret that Windows 8 has been a disappointment for many, cueing a large number of Windows 7 users to avoid upgrading in order to avoid using an operating system that many are unhappy with. In response Windows has made its new update Windows 10 available as a free upgrade to Windows 7, 8 and 8.1 users for a year after its launch this autumn.

Upgrading to Windows 10 from earlier systems may take a bit of getting used to but, ahead of the consumer preview this February, we’ve highlighted the main differences between Windows 7, Windows 8 and Windows 10 so you know what to expect. Upgrading from Windows 7 to Windows 10

If you’re upgrading from to Windows 10 from Windows 7 the new operating system may not be as different as you think. While the start menu will be staying, there will be new Live Tiles to the right that provide up to date news, weather and trending information. Live tiles are Windows 10’s answer to gadgets and they can be resized, repositioned and clicked on to enter a full app. The Windows Store will be where you search for and download apps, from productivity to games, which are synced automatically with any other Windows 10 devices you own.

Continuum is a new feature which will help to ensure Windows displays on devices with varied screen sizes- using a device with a keyboard attached will show the desktop version but touchscreen devices will show Metro, a screen full of bright apps and Live Tiles.

If you don’t already have a Microsoft account then you will need one to access all features of Windows 10, but you’ll still be able to use your current user account too.

A big change for Windows 10 vs Windows 7 is that instead of searching for files and folders by typing into search bars, the new virtual assistant Cortana will be the main search engine for this update. Cortana responds to both typed text and voice commands preceded with ‘Hey Cortana’, and can also perform other tasks such as checking the weather or creating an email for you.
Windows 10 comes with a new browser currently called Spartan with a new rendering engine and a sleeker design than Internet Explorer. Spartan will be compatible with Cortana and features a built in PDF reader and sharing tool that can send manually marked up web pages.

Windows Media Player has been replaced with Xbox Music and Xbox Video in the update which will play your mp3s and the majority of videos you may have saved on your hard drive. The ability to play DVDs however has been removed from this Windows update due to the popularity of online streaming services and you may have to purchase a separate app if you have a large DVD collection you still like to watch.

In addition an Xbox app will upgrade gaming for Windows users making it possible to stream Xbox One games from consoles and play using an attached controller, plus chat over Xbox live.

Upgrading from Windows 8 to Windows 10

When upgrading from Windows 8 to Windows 10 you’ll see the return of the start menu (a happy occasion for some) with Live Tiles making an appearance to the right, instead of the Windows 8 start screen which fills the whole desktop. A new notification system to the right side of the screen will take the place of the Charms menu and hold updates such as new messages. There will be more built-in apps and the task menu will be visible at all times which will make switching between apps easier.

In addition, the control panel and settings app will be united into one app that should help to curb confusion. A new maps app seems more geared towards tablets and 2-in-1 devices than laptops or PCs, but the touch versions of Word and Excel look interesting.

Continuum is a new introduction that will allow Windows to change UI as need be for devices with detachable keyboards- when the keyboard is attached the normal windows desktop displays, but once the keyboard is detached the touchscreen friendly Metro will be applied. Continuum is also an effort by Microsoft to ensure that Windows 10 will display on devices of any screen size.

Cortana is also new in Windows 10 vs Windows 8 and is described as a virtual assistant. Cortana has voice recognition and can respond to your commands and questions by providing answers from the web as well as perform actions such as creating emails. You’ll be able to use the greeting ‘Hey Cortana’ to access the assistant as you can currently do with Windows Phones.

Windows 10’s new web browser, Spartan, comes with a sleek interface and a new rendering engine. Spartan features a built in PDF reader, is compatible with Cortana and has a built-in sharing tool with the ability share web pages that have been manually marked up.

When updating to Windows 10 from Windows 8, you’ll also notice that the Xbox app has had an upgrade- it will be possible to stream Xbox One games to a Windows 10 device and use an Xbox controller connected through a USB cable to control them. You’ll also be able to capture frames from games and chat over Xbox Live using the new app.