20 Most Prominent Web Technology Trends of the Year 2013 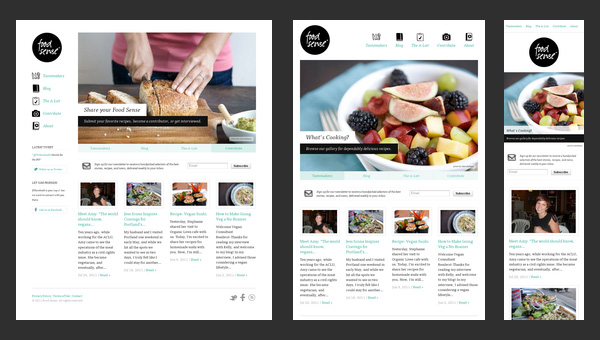 Years are passing by with trends constantly changing in the world of technology. None of the fields are left out and it is apparent that every field has paved its own path when it comes to setting trends. Web is a whole new world, with its population growing with each passing moment and new techniques being born, it is bound to set its own trends that users have to follow. Today we will be touching some of the most prominent web design and web development trends that web designers and developers are likely going to follow. This is by far one of the more prominent features in websites today, and is likely to only increase in the time to come. Making the website responsive to not only computers but mobile phones and other smart devices has become crucial today. If your website is not responsive to devices other than computers and mobile phones, then you are most likely to end up getting only a small percentage of the visitors you can get otherwise. In the past typography was seen as a relatively small or less important part of a website. However, the importance of the style of text used in a website has gained a lot of importance lately, and in the near future designers will certainly be focusing on this pivotal aspect of their website a lot more.

Today many websites also have horizontal scrolling in place though once again considering the increased amount of traffic coming from mobile devices vertical scrolling is what seems to be most appropriate. It is a lot easier to view the website with vertical scrolling, most importantly it is ideal for smaller screens. Much larger buttons were used in the past mainly for their aesthetic appeal though things have changed. With the introduction of touch interfaces on smart phones and other portable devices, larger buttons don’t only look good but are in fact much more practical and far easier to use on a touch interface.

This not only relates to creating attractive and eye-catching logos and brand images but rather designers will be focusing on making the entire website work with the logo itself. Making the website coherent with the logo and making it all look as one package rather than making the logo stick out prominently is in vogue now.

Designers will now be looking to add more media to the website in terms of pictures and videos. These could be pictures of the main people in an organization or maybe a video of customer reviews. Whatever the choice, the point is to provide visitors with a better understanding of whose web page they are visiting. This is also a great chance for website owners to introduce themselves to visitors.

Today it’s not just about the visual appeal of a website but also its functionality. For this reason designers who can also code will be much more efficient at building better websites than those who can only design. A great design isn’t worth much if it doesn’t work well, is it?

Speaking of design and aesthetics, many of the freshly re-designed websites are making use of a single color scheme all over the site. Varying the tone and depth but in a large part sticking to the same color.

This is a new web trend which is slowly but surely taking over the concept of featured sliders. The highlight box or feature box is much easier to use and is being employed widely by most sites. You’ll be seeing more of these showing up even on older sites. Flash has been around a long time and everyone is familiar with it, but due to mobile devices which need things to load up faster, Flash is already run over by HTML 5. HTML 5 offers a similar experience but is much quicker and lighter, not to mention there are still some things in which Flash has its strong hold.

In the time to come websites will be looking to lose some serious size and drop well below the one mega byte mark. This will be achieved by creating more efficient libraries and achieving results to make sites more efficient.

Now with so many devices being hurled in to the market every few days we will be seeing many more designers and developers putting their heads together to tackle the problem. The solution is to share devices among firms rather than create a massive collection of all the latest devices to test your site on. With much software out there that provides one with the very basic building blocks of nearly any website we are more likely to see an increase in the modular style websites. Less fluid styled pages and more structured and straight forward designs.

There have been many hurdles in the past regarding things which have been standardized for developers. As developers have not been actively participating in the discussion about what should be the standard, they have not been too happy, though this will soon change. There is a certain increase in the education which is being provided to today’s youngsters in terms of coding, developing and hacking. With many more clubs and outlets open for young adults to learn these skills, there will certainly be a larger pool of capable developers in the near future.

In 2012, there have been so many new developments and such a large variety of new client requirements that there are bound to be a number of new tools for developers. This should include tools which are helpful in creating pages that are mobile device friendly.

A larger amount of content is likely to be available in order to give the visitors a better idea of where they are and who they are communicating with. Pages are likely to host more personal information. As Apple and Android and other tablet operating systems grow more self centered and further apart, developers are likely to resort to creating HTML apps which can be sold to all tablet users. It is likely that an increasing number of developers and firms will be focusing on creating services which are more mobile device centered, while at the same time making them available for other users as well.

Not only will developers be using newer techniques such as scalable designs, but will also be focusing much on the look of the page itself making sure it is fun to look at and fun to read.

In this fast changing world of technology it is important that we keep pace with changing trends or its most likely that we end up with obsolete knowledge that is no longer of any use.