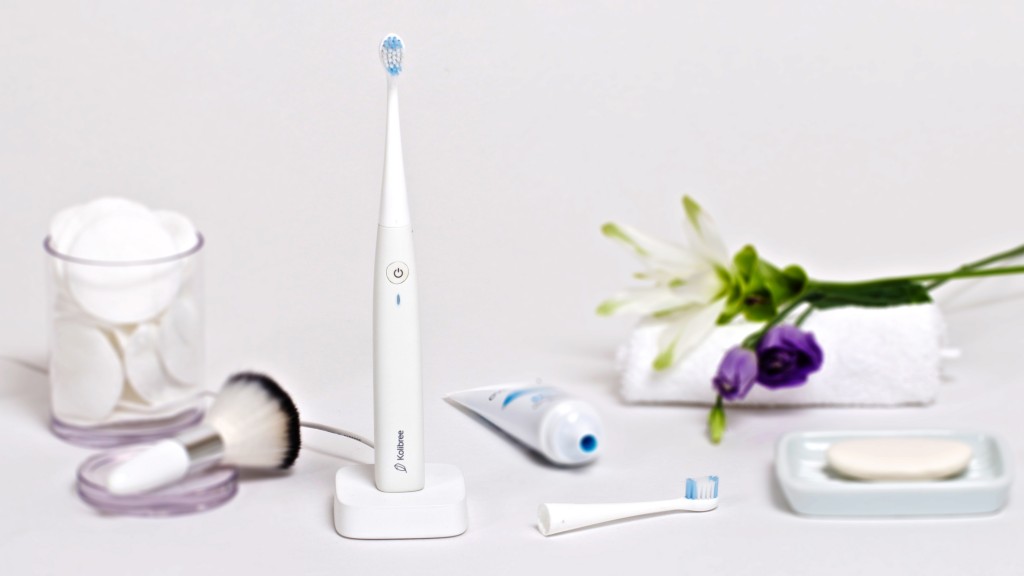 Brushing your teeth is one of the necessary evils of life- it’s a boring task but must be done to keep bacteria, decay and bad breath at bay. But what if there was a way to make brushing smarter and more entertaining? Kolibree has come up with a way to do just that.

The Kolibree toothbrush has sonic vibration technology and 3D inertial motion sensors to make tooth brushing more effective and also connects via Bluetooth to provide real time analysis and feedback via a smartphone.
The sleek white ergonomic design with induction charger means that the brush doesn’t look conspicuous and it is lightweight with just one button so can be easily used by both adults and children. The brush is fully waterproof and has a small screen that shows the status of the Bluetooth connection and how much battery power is left in the brush. Each brush is supplied with two heads that have medium bristles and small rounded tips which allows the user to reach into often-missed parts of the mouth with effective vibration transfer. The Kolibree toothbrush should last around a week from each charge, even when brushing at 24,000 vibrations per minute. The smart toothbrush is controlled via a smartphone app which will record data automatically via the brush’s accelerometer, gyrometer and magnetomer, allowing you to set personalised brushing programs for up to 12 users. As well as checking how often and for how long you brush, the Kolibree Coach part of the application will allow you to track your brushing zones, give feedback on your technique and provide you with professional brushing tips in real time, meaning you have your own personal brushing coach. You can then create your own Kolibree program to download to the smart toothbrush that will help you improve your habits. The games and applications available for children will help to motivate and encourage better brushing habits. Parents can view data and set objectives for their kids brushing so that they can work towards gaining rewards within the games. The character’s movements are based on toothbrush motion and orientation, making the Kolibree games like nothing they’ve ever played before. The Go! Pirate game for example, uses a pirate character to motivate children to use their toothbrush as a controller, brushing in the right area for the right amount of time will enable the pirate to move and collect coins, allowing the child to evolve in the game over time and move up in ranking.
The data collected about you and your children’s habits can be kept private or shared with your dentist, presumably via the app or email.

The most interesting part of Kolibree’s new product is that the smart Bluetooth toothbrush works on an open platform, allowing 3rd party designers to develop compatible apps and dentists to develop new ways of keeping up with their patients’ dental health. In this way, Kolibree and other app developers can provide a large range of new games to interest every child, plus fun and helpful apps for adults that will enable them to improve their brushing techniques and oral health. The Kolibree smart toothbrush is made for iOS but is also compatible with Android tablets and smartphones. You’ll need a device to control the brush but you can also see an overview of your brushing data on the Kolibree web platform, such as regularity, over brushed and neglected zones, and family statistics, plus order new brush heads and other dental products directly.

Kolibree is the not the first Bluetooth connected toothbrush that records data via an app, as the Oral B Pro 600 series brushes also do the same. However, the Oral B brushes have a relatively complicated app that isn’t fun and doesn’t appeal to children in the way that Kolibree’s will. Oral B also don’t provide open APIs for their brush like Kolibree do which means the only choice you have is to use the official Oral B app.
The Kolibree smart toothbrush is set to launch later this this year with a price of $199. This may seem steep for a toothbrush, but consider Oral B’s Pro 600 brush which retails for around $340 and suddenly the price doesn’t look so expensive.

We’re excited to see how far Kolibree can take the development of their apps and games so will be eagerly awaiting the launch of this new open platform toothbrush.