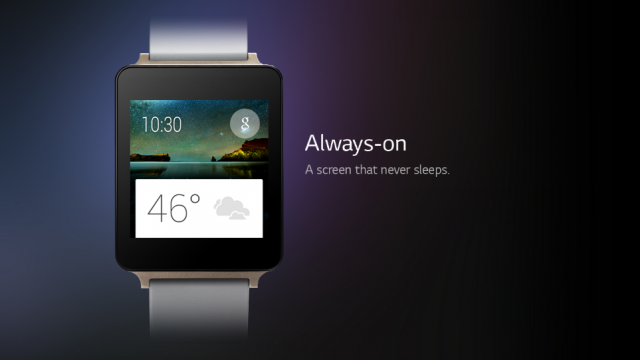 At the moment, how companies are allowing users to check the time on their smartwatch but not waste too much battery is by building in an accelerometer feature that means when you bring your watch round to look at it, the screen comes on. However, what if you’re sitting at a desk or driving your car? There are quite a few theoretical times when twisting your wrist to view the content on your screen isn’t great.

Android Wear recently introduced a mode where you can have your smart watch always on, but only merely sipping on the battery as opposed to constantly draining it. Google have also brought this to some external applications too, such as Google Maps which shows a black and white view when the app isn’t in use but then shows you the normal view when you look at your wrist. This stops you from sometimes not being able to see the content and having to flick your wrist to carry on your directions. One of the biggest complaints about smartwatches is that you’re paying hundreds of dollars to simply have a smaller screen on your wrist to view what your phone already shows you. They are referred to as companions because they require the original phone to be able to actually do anything. However, Google has taken this away with the ability to have smartwatches access Wi-Fi on their own. This means that if your phone dies or you don’t have your phone in Bluetooth range, as long as you have Wi-Fi, your smart watch can still access everything it needs to. It’s a great concept which is surely just leading to the ability to have 3G smart watches that don’t require phones at all. Is it a necessity? Maybe not. Is it fun? Is it also actually fairly useful these days? Yes. In a recent release, Google added into Android Wear the ability to send emoji as replies to messages within messaging applications. However, what is even cooler is the ability to simply draw these emoji (far easier than selecting from the 100+ mini-icons.) When replying to a message, you draw out a rough look of the emoji and it will either instantly recognise it or you select from the emojis that closely represent your drawing. This results in replies to messages being far quicker and easier. With the use of emojis ever-growing it’s also a great addition to those who love to reply to messages with a simple emoji. A lot of these features have come from recent updates to Android Wear to separate them from the other competition. One feature that is far different from anything other smartwatch OS’ offer is the ability to navigate through your menu by flicking your wrist to scroll down the list. It’s not exactly something that is going to be used by everybody every day, but if you can’t use your other hand to tap your watch (cooking, driving, cleaning, writing etc.) then the ability to flick your wrist to navigate makes a lot of sense to have. You’d think that one of the most interesting parts of having a watch with a digital face is the ability to change watch faces depending on your mood, the season, design changes, your latest hobby or whatever you want. However, Apple has not implemented this feature into the Apple Watch (except their own 11 customizable faces) and Android have. With Android Wear’s app, you can select from different watch faces which can be submitted by other users and some even allow you to customize them like you would the Apple Watch’s faces. For some, this may be a game changer, having the ability to fully customise the look and feel of your watch face to reflect what you want.