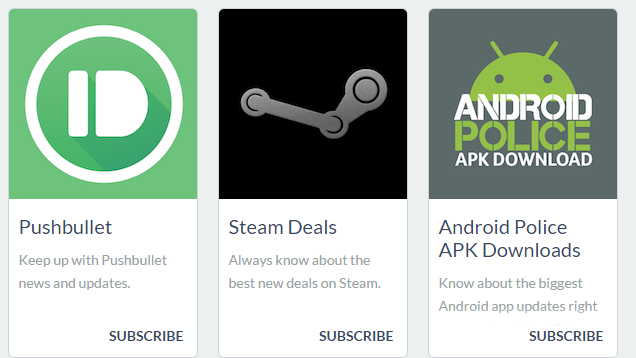 Recently PushBullet introduced yet another feature to their attempt at improve everyone’s every day lives. Channels is PushBullet’s answer to those who want specific notifications from a curated set of websites. You can get information, news, updates, links, apps and so much more sent straight to your notification shade. In this article, I’m going to pose to you ten of the best PushBullet channels that I think will enhance your lives. Obviously if you’ve got a big interest in PushBullet then this is a channel you’ll want to subscribe to. It gives you updates on all new features and articles that you’d want to know about PushBullet. What’s most exciting is that PushBullet is becoming renowned for pushing out major features quite regularly, so I can imagine this is going to be quite the interesting Channel to subscribe to if you have any interest in future PushBullet features. Android Police are an Android-deciated website that are famous for their ability to download the latest and greatest updates for the biggest applications via APK downloads. This channel allows you to get notifications sent straight to your phone whenever they publish a brand new APK download of the the latest update to an application.

This is a useful channel as Android Police usually get the APK a few days, even weeks before the app update is released to the app store for some people as obviously Google work on a roll-out system in which it is spread from their location across the world. On top of that, the updates that Android Police usually upload are major updates and for only the most popular applications. This channel covers the car enthusiasts of you who enjoy to keep up to date with the latest cars coming out and how they perform. This channel sends you push notifications of the articles that Top Gear posts on their site based around what they call ‘First Drives’ which is their first impressions of the latest cars either just out on the roads or that are coming out in the next couple of years.

As aforementioned, this is for those of you who love to keep up to date with all things automobile. The articles include specification details of the cars for those of you who want to go into more depth with your car knowledge. Along with specifications for each car, the articles provide a price point and often how much add-ons for the cars are and how much different engine sizes and extra will cost!

I was going to describe this Channel as the Channel for those who are interested in everything Apple. But isn’t that almost everybody? This Channel allows you to keep up to date with the hottest and latest apple news from all devices across their roster including rumours of upcoming devices and more. If you have a new Mac, iPad, iPhone whatever it is or you are thinking of buying one, I’d recommend subscribing to this Channel as it allows you to know what updates your device may be getting or even what new versions of devices might be coming out that you may want to wait for.

This is, as I said before, good for those who are interested in Apple news. Now this feed can get quite annoying with multiple notifications a day obviously due to the high number of different devices and potential updates that can be provided. Therefore, I’d recommend trying to Channel out, but only if 1. You don’t get too annoyed by too many notifications and 2. You have a real passion for ALL things Apple. Steam has, over the past half a decade, taken the computer gaming world by storm by offering gamers a one-stop-shop to buy the latest and greatest games. Even more recently, Steam has offered lesser developers and indie developers a place to publish their great titles resulting in a massive audience being able to appreciate the smaller, lower budget games.

With this Channel, you get push notifications once a day for the steam daily deal that they are offering. This is obviously great for those who may have a game on their wishlist that is just a bit too pricey and are waiting for it to come down. Or maybe even those who just love a good deal on a game and love to try out all sorts of games, but only at a reasonable price. I’d highly recommend this for ALL PC gamers as Steam’s deals have become very famous within the PC Gaming world for offering great discounts on some great games

With SuperBowl happening just a few weeks ago, some of you may have a new found passion for American Football and therefore want to explore their new favourite team’s results and news. This is the perfect Channel for you if so; it allows you to pick as many teams as you want and then you’ll receive news and results for those teams right in your notification shade. Sure, many applications can already do this, but this saves the effort of having to find another application that does it exactly how you want it.

AMAZON FREE APP OF THE DAY

This Channel speaks for itself. Amazon has for quite a while now, offered a free application every day. This is their attempt to make more people download from their own app store as opposed to the Google Play Store. And with this sort of offering, it has worked for me. This Channel allows you to receive not only a notification telling you which game is free and a description about it but also a link to the application itself so you can download it straight away.

This is THE channel for Android owners who love a good deal and love to download apps when they’re on sale. Maybe there’s an application you’ve been waiting to buy for a while, but it’s always a been a bit too pricey for you to justify, subscribe to this channel and your luck might just be in. PushBullet have a Channel that allows you to get notifications in your shade every time anything interesting about the game is announced or released. This includes all the information for patches and raids and even general news about the game. This is the perfect Channel for those of you interested in the WoW universe and maybe even those of you who have been contemplating investing your time and money into the game and want to see one feature that will finally draw you in.

For quite a while now, the Humble Bundle has been the go-to place for PC, Android and even Book fans for good quality games but at whatever price they want. Humble Bundle have set up a basic idea that you pay whatever you want for a select bundle of games, books or apps of their choosing, however if you pay over the average for the bundle then you’ll receive a bigger title which is usually the draw-in as you are usually only paying an extra £4-£5 to have the game that on Steam/In a store/In the Play Store may be worth more than that!

The Humble Bundle Channel allows you to receive a notification either when a new item is added to a bundle or when a whole new bundle is released. This is great for those of you who use the Humble Bundle to purchase all your games and therefore love to know when the newest one is out. It would also be great for those of you who love to explore other areas within that field and love a great deal in such! Finally, none of these Channels would be accessible without the brilliance behind PushBullet itself. If your interest is piqued by these aforementioned Channels and you wish to see what else PushBullet will bring to the market in the future then this is the Channel to Subscribe to!

These Channels potential look limitless with the ability to receive news, information, updates, apps, links and much more direct to your notification shade. It’s something that enables you to get news that you want without having to receive you may not be interested in from certain websites!