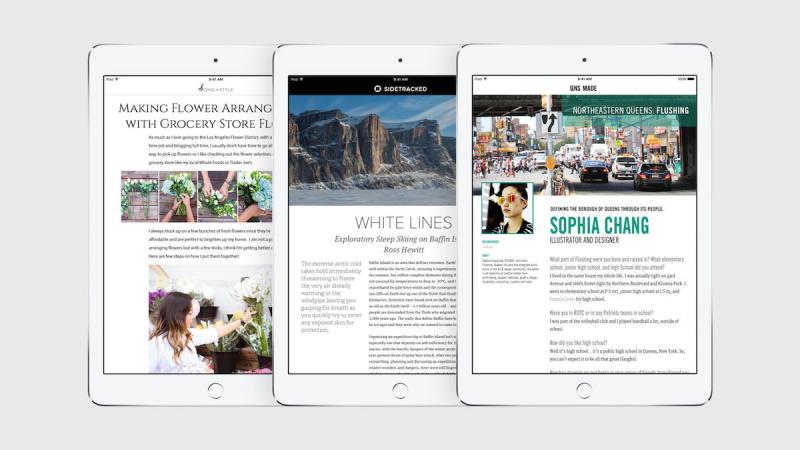 SO WWDC has been and gone and despite the lack of interesting rumours, some rather really exciting announcements were made for previous Apple product owners and developers alike. Obviously there was no new hardware as this isn’t usually the time for it, that comes later in the Fall. However, we saw some rather interesting additions and feature updates to the immovable iOS platform, taking it to iOS9.
There we rumours that we weren’t going to see massive innovation and that the update would merely be ensuring the platform was working like it used to before iOS7 and that’s kind of what we heard from Apple. However, we also got some really nice and new interesting features that iPhone and especially iPad users will be very excited to hear about. SO let’s get into the top 5 features coming in iOS9. 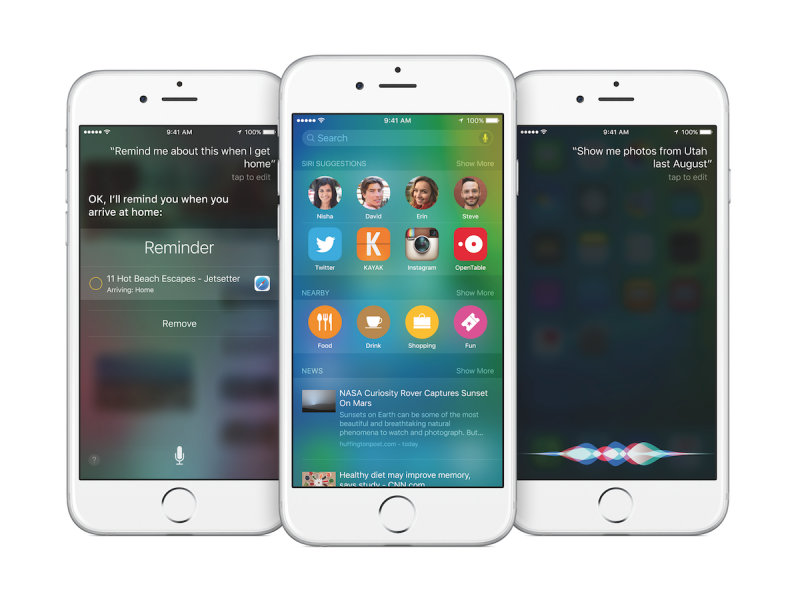 Unfortunately, Siri has become more of a burden that a useful tool since its announcement with error rate and inconsistency just being too high for users to constantly use her. However, Apple has said they’ve worked to reduce the error rate number 40%, taking it down to 5% which is better than Google Now (apparently). On top of that, wth iOS9, Apple is making Siri far more intelligent and introducing something called Proactive Assistant.

Proactive Assistant has two notable additions to the OS. The first is when you swipe left of your first home page, you’re presented with a new interface that is similar contextually aware. For example, it shows people yu may want to contact based on email invitations or upcoming calendar appointments. It suggest to you apps you might want to use based on your location or what time of day it is. It also has News articles which is something we’ll come back to later. 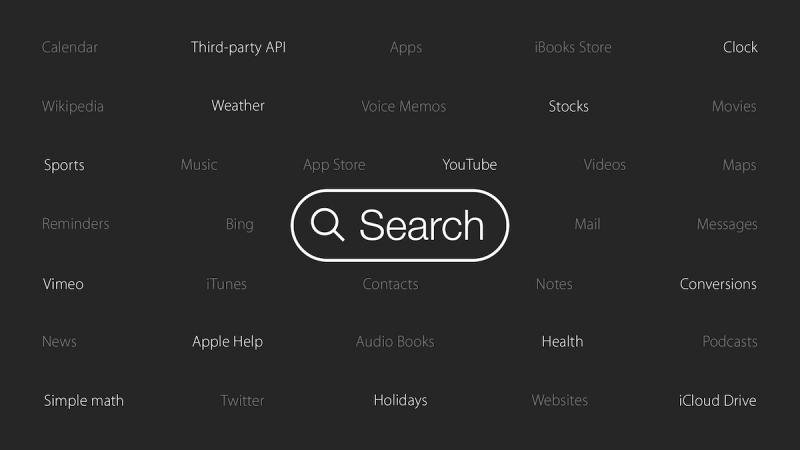 Something that caused a big round of applause during the iOS9 feature announcements was the one that said that Spotlight would now allow developers to incorporate their apps into the spotlights results. This is a huge thing because it makes was already a fairly universal search of your phone into even more a universal search.

The example Apple used on stage was the ability to search for “potatoes” and the result brought back recipes from the popular recipe application Yummly. This is a really great feature and one we are definitely be seen used for quite a few different purposes by developers. It is Apple’s way of slowly opening up their platform more and more which is always going to be a great thing for both developers and users of iOS. 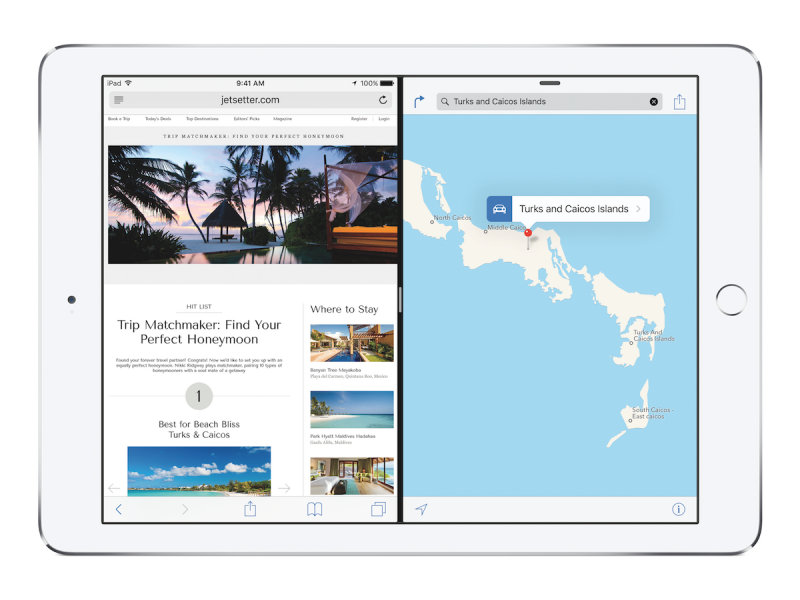 One of the biggest complaints about iOS over the past few years is that the iPad version is merely an upscaled version of the iPhone version. However, with WWDC15, there were small rumours of Apple introducing the ability to use split-screen apps on your iPad to take advantage of the larger screen. We saw exactly that and more when it comes to multi-tasking on the best tablet in the world.

With all iPads you have the ability to swipe in an application from the right and present it in a thin view that’s great for apps that incorporates streams of some sort. However, if you have an iPad Air 2, you can go beyond that and bring the apps side by side and work on both of them at the same time. This creates such incredible potential and takes the iPad into a far higher level of usefulness. The iPad Air 2 has more RAM than previous generations and therefore, can handle more multitasking. It’ll be interesting to see performance levels with iOS9 apparently improving upon these.

Another little feature that is actually really quite cool that iOS now have natively is the ability to a pop-out video wherever you are. For example, if you are in Netflix or the ESPN application and you suddenly get an email or iMessage you wish to respond to, when you tap on that message, the video will separate from the app and become a floating one above your application. This can then be moved around, pinch-to-zoomed to make bigger and smaller and even be put off to the side if it’s in the way of your current application. So cool and something we’re very excited to play around with. 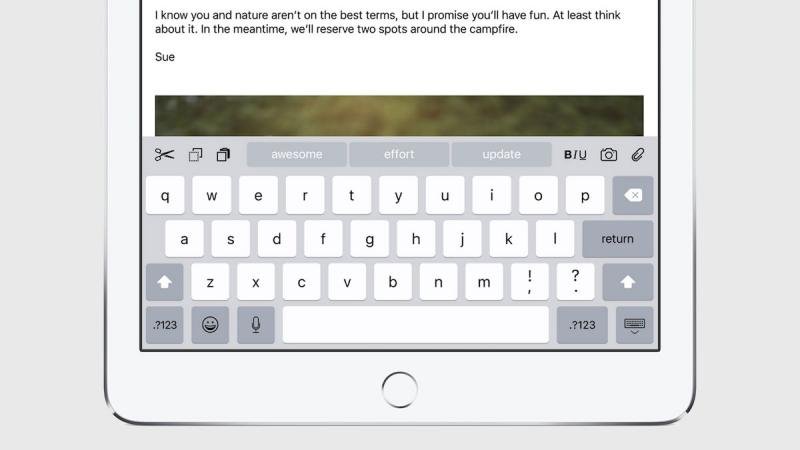 Okay, so the keyboard on the iPad has always been a little difficult to use and so Apple allowed you to split it into two halves making it easier to type. However, Apple has also now introduced the ability to use your iPad’s keyboard as a mouse. Yes you heard that right. With the hold of two fingers over your keyboard, you can move your cursor around an email, message, block of text on a web page and begin highlighting and selecting away.

On top of that, Apple has brought in a more intelligent keyboard that takes more advantage of the huge screen real estate you get on the iPad. You can cut, copy, paste, draw, bold, add attachments and more depending on which application you’re in.

Finally, Apple got rid of the dreaded Newsstand application and have introduced the really really good looking News application that looks to take on the likes of Flipboard and Feedly. News is a beautiful News application that allows you to select some topics and publications you may enjoy reading from and then allows you to scroll down and select them. These publication’s posts are then presented in a stunning way with great transitions, animations, different font support and more.

However, News has a few more functions that take it beyond just a basic news app. It also has the ability to recommend you topics and publications based on that which you’ve already selected and the posts that you’ve already read. It’s nothing we haven’t seen from other News applications but you’d struggle to find any that have done it this beautifully and struggle to find any others that will receive the incredible support that Apple will from the biggest names in newspaper and online blogging in the world.