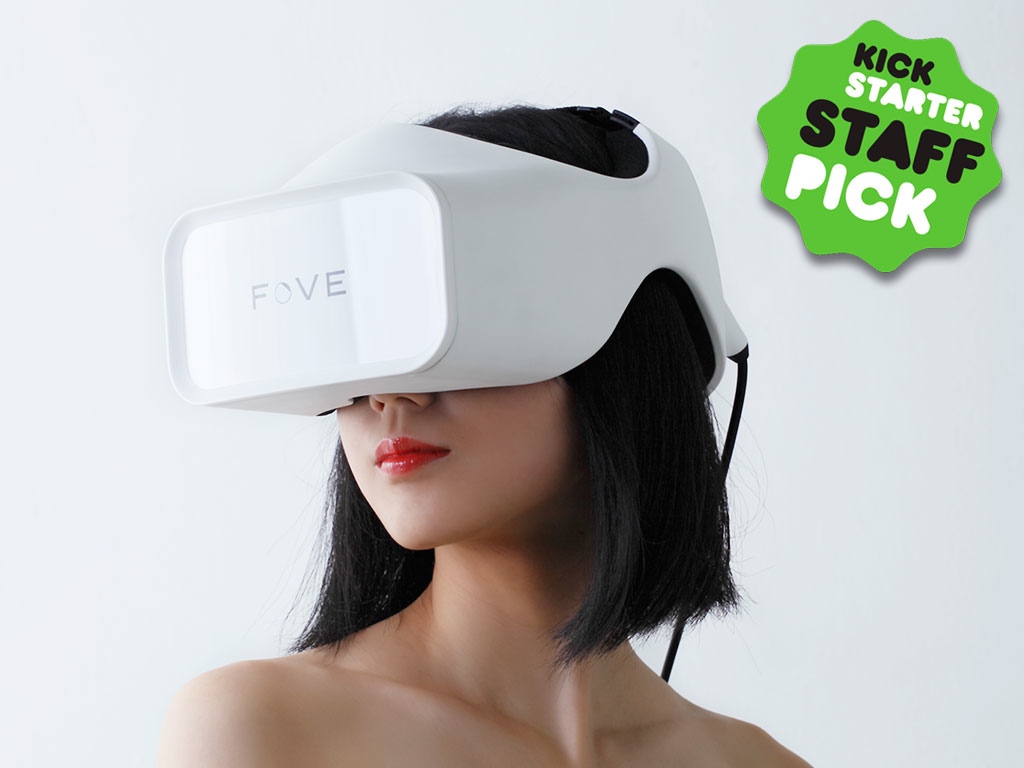 Fove, a new virtual reality headset that allows users to control their environment with their eyes, has recently launched onto Kickstarter.

The VR headset uses a 2650×1440 display and eye-tracking technology to enable wearers to control their virtual surroundings with their eyes. The headset contains two infrared sensors that bounce light from the retina of the eye in order to work out the angle of the user’s view to within 0.2 degrees. The headset can also detect and track depth of field focus by measuring the parallax between the eyes using algorithms.

The Fove headset is able to show the wearer scenery that responds to their focus, blurring and sharpening details depending on where they are looking to react to each eye movement. The head trackers in the headset reduce simulation sickness as users can use natural head movements, tilting or spinning their neck. Wearers can also make eye contact with characters in a virtual reality game to share a smile or knowing glance and see the character react, which can’t be done with a lot of current technology as other headsets don’t track exactly where the wearer is looking. Further to this, with the Fove headset, users can quickly and accurately aim weapons. Fove says that weapon aiming can happen with more speed than using a keyboard or mouse.
The chief executive of Fove, Yuka Kojima, has said that the headsets contain eye tracking technology that is able to interpret intention and emotion by tracking subtle eye movements. This allows the wearer to control virtual reality objects as well as bring human emotion and connection into a virtual environment.

The company calls the eye-tracking enabled headset part of the ‘third generation’ of virtual reality headsets which allows wearers to emotionally connect with a virtual scene as well as control it with their eyes. Rival products such as Oculus Rift and Project Morpheus don’t contain this type of technology and only allow users to view or control a virtual reality environment rather than engage and connect with it too.
There are more benefits to this headset over others too- there are no gaming rigs needed to use the system as it is compatible with computers for virtual reality graphics rendering. In addition, existing VR games can be converted for use with Fove and the 100 degree high resolution display means that games may look better than on other screens. The project began life at the University of Tokyo’s academic collaboration facility and is being developed at a hardware lab in Japan in collaboration with hardware manufacturers like Toshiba and Samsung. Fove’s chief executive officer Yuka Kojima was a game producer at Sony Computer Entertainment in Japan and Locklainn Wilson the chief technology officer is a facial recognition technology expert.

Fove can be used for virtual reality gaming and interactive movie watching but also in medical, education and conference settings in the real world. Fove say that the headset could be used to create virtual simulations of surgery or driving that display relevant information and can help in self-analysis. The headset can also be used to bring movement and enrichment to the lives of those who are physically disabled. A project in collaboration with the University of Tsukuba’s Special Needs Education School for the Physically Challenged enabled Fove to help disabled children to play the piano using just their eyes. The headset tracks eye movement and blinks which trigger specific chords and are then conveyed to the piano.

In order to begin finalising and manufacturing the product, Fove wishes to raise $250,000 through Kickstarter. Fove has already been through four prototypes and production testing will take place after the crowdfunding round has finished. By spring 2016, Fove hopes to begin shipping of the first products and developer kits which will allow users to create content for the headset and push the design or software forward even further. Facebook’s Oculus Rift VR headset is also set to begin shipping at the beginning of 2016 and pre-orders will begin shipping in the second half of this year.

With over a month left until the Kickstarter campaign ends, Fove has already managed to gain more than the amount of money it needs to finish the development phase of the project and bring it into production. Users can purchase a headset and donate to Fove with a minimum pledge of $349.