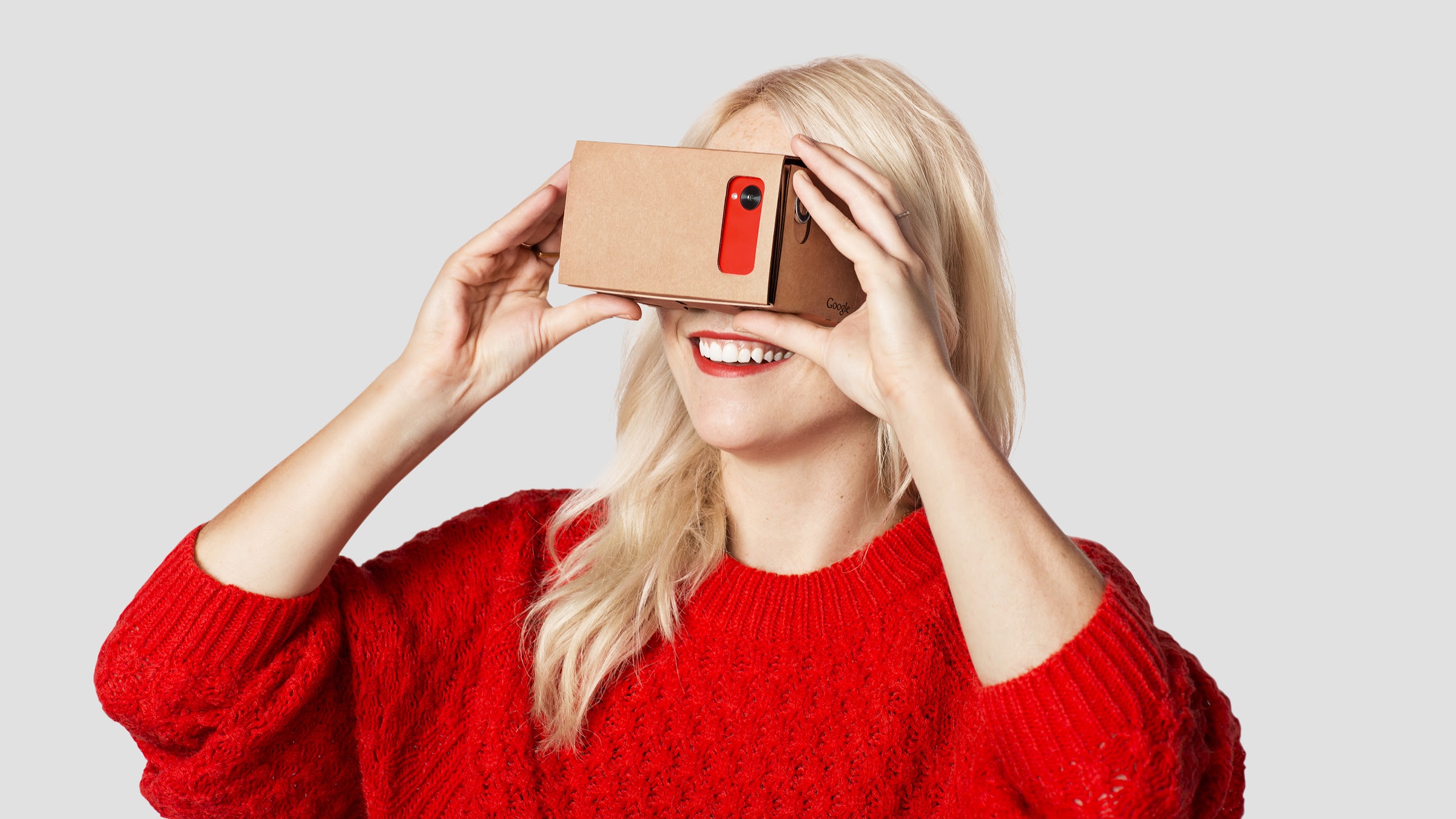 So we’ve spoken a lot about the Google I/O here on GeeksZine over the past week or so and we have one more for you now. Google Cardboard was a simply gimmicky piece of cardboard introduced last year that folded into a headset that allowed you to view your phone in a virtual reality world without breaking the bank. At first people thought it was almost a joke. The hardware was made of cardboard and worth $20 when companies were out there making headsets worth hundreds of pounds made from high-quality plastics and some aluminium. However, after a few journalists and technology bloggers got their hands on the device and had a chance to play around with it, they were actually in shock. They had managed to get virtual reality into their homes for $20 (free for the lucky ones who got a free Cardboard at the event).

Therefore, we think that for this reason, Google Cardboard could be the jump start into the mainstream that virtual reality needs. This is a more personal post about my own experience with the headset after purchasing one by the brand I Am Cardboard from Amazon for $14.99. I was expecting, for that price point, for the technology to be a bit rough around the edges and for it to be more of a first look than a full-fledged experience that would blow my mind. However, as soon as I put the headset on, I was amazed. What Can It Do?

For a quick run down, the Google Cardboard is actually a piece of cardboard that you insert your Android (and now iOS) device into and then look through the viewfinder to experience virtual reality. Google has a Cardboard application for Android and iOS that is free and shows you some great demos. The demos allow you to view your videos in a cinematic experience, looking around and hitting the magnet button (how you interact with the VR) to select different objects. You also have a Disney-like movie of a mouse chasing his hat which is beautiful for kids to watch and enjoyable for even myself, a 21-year-old man. There’s also a couple of informative demos, one that takes you around the palace of Versailles, allowing you to look in real photo-like imagery as you receive information about said imagery. The other informational experience is the ability to pan around different objects from history. This is the one experience that I didn’t feel worked quite as well, despite turning your head and look up and down, you were merely tilting the object. It felt less immersive. Finally, within the demos you have the option to go on Google Earth, view different areas from space and then look around and even fly across some of them. It’s an experience that despite the awfully low rendered imagery can cause some vertigo when looking down which is a testament to the incredible technology. But Then There’s Third Party Apps Too

Google’s demos are incredible to introduce you to the software and the idea of how to use virtual reality. However, the real experiences are within the Google Play Store and App Store. Third-party developers have gone out there and created some of the most incredible experiences. What is nice to see is the wide range of choices. You can be on a tour of space through a trippy rollercoaster, you can swim with fishes under the sea, you can play a game of curing someone of depression with scientific insight into the mental illness and you can even scare yourself to death with the Insidious VR application which has you sitting in a room facing the main protagonist as scary goings-ons happen around you. We’d highly recommend trying out as many of these applications as you can. Luckily

We’d highly recommend trying out as many of these applications as you can because they all bring incredible experiences that, when coupled with a pair of headphones, can really make you feel immersed in a completely different world which leaves you disappointed when you take the headset off and come back to reality.

On top of these, Google has introduced 360-degree Cardboard-compatible apps to the latest update of their YouTube app. This results in some great videos, including concerts, music videos, more horror films and such being able to be viewed liked you’re there watching the event itself. We’d highly recommend trying out some of the bat suit videos along with the solar eclipse video, truly beautiful examples of how 360-degree videos should be utilised. So Does It Actually Work?

What stunned me most about Google Cardboard is simply how incredible it is. When you first put the headset on, you aligned the image on screen with the piece of cardboard down the middle to calibrate it. You can also calibrate your experience by scanning the QR code on your headset within the Cardboard application. Once you’ve aligned the headset right, everything looks 3d and incredible. You constantly have to keep reminding yourself you only paid $15 for this thing (and as little as $3 if you wish) because of how well it works.

Some of the applications aren’t great, they have a slow FPS and a little motion blur when panning around the experience. However, the better applications are truly incredible and can immerse you so well, you’re simply left stunned at the power of this idea.

Now, you do have to have a fairly high-end Android smartphone and an iPhone 5+ to run some of the apps and games you’ll be playing. In addition, your device can get extremely hot and quite a few times my device ended up freezing due to being too hot. This is by no means a device to consume games for hours on end, it is to be used for 5-15 minutes to play around with which is absolutely fine because of some of the drawbacks with VR right now. The Drawbacks With VR Right Now

Virtual Reality is a massive technology at the moment, advanced every day by some of the biggest companies in the world. However, there are still problems with virtual reality that mean that it is likely be many years away from replacing the XBOX’s and PS4’s of our front rooms.

By far the biggest problem with virtual reality right now and especially with using your phone as your screen is motion sickness. In fact, it has been deemed Virtual Reality Sickness. Virtual Reality Sickness is, and I quote “Sensory conflict theory posits that sickness will occur when a user’s perception of self-motion is based on incongruent sensory inputs from the visual system, vestibular system, and non-vestibular proprioceptors, and particularly so when these inputs are at odds with the user’s expectation based on prior experience.” This basically states that virtual reality is causing your brain to make your senses conflict making you feel a different sense of balance and spatial awareness. Causing the feeling of motion sickness. “The most common symptoms are general discomfort, headache, stomach awareness, nausea, vomiting, pallor, sweating, fatigue, drowsiness, disorientation, and apathy.” Not nice.

However, Oculus Rift, one of the leaders in virtual reality headsets over the past couple of years are working vigorously on ensuring Virtual Reality Sickness is not a problem with their headsets. They are doing this by ensuring a constant 60 frames per second (the average human sees at 45, yet trained fighter pilots can see at up to 255fps) during their experiences which would result in less confusion for the brain. Oculus are claiming that their initial devices won’t be able to be played for hours on end but as new versions come along, you’ll be able to use them for longer before experiencing such issues.

Another issue with virtual reality right now is the headsets themselves. With Google Cardboard, you get a focal length lens of 45mm built into the headset to allow you to view the screen that is pressed right up against your face. However, after letting my girlfriend’s mum and her boyfriend try out the headset, they both said that the images remained blurry despite many adjustments. Now, this is one problem with spending $15 rather than $200, you’re limited to the focal length you get and therefore, if you have less-than-great vision then you may not get the best experience.

To combat this, Oculus Rift played with two different ideas. Initially, they experimented with having different shaped headsets so users could wear glasses and such when viewing them. However, they found the better option was to have the lens changeable. Similar to how you use binoculars to zoom in and out and gain focus, the lenses on the latest Oculus Rift models do the same. All of which we’re sure will be part of the set-up process when you first unbox the device.

If you have any interest in seeing what Virtual Reality is like then definitely get yourself a Google Cardboard headset. What’s so great about the concept is that all the headsets are incredibly cheap. You could easily head over to Amazon now, search “Google Cardboard” and with Prime delivery have a headset with you for $10-$20 by tomorrow. In addition, we can assure you you’ll be getting a great experience.

Google Cardboard, for me, has taken me into Virtual Reality like I didn’t think it would. As of right now, I’ve been to France, Space, been inside a scary dark room with monsters, been underwater with fish, watched a sunsetting, been on a rollercoaster through a jungle and been inside a brain and cured someone of depression. And right now, I’m sat at my desk typing on a computer. It is truly incredible how immersive $15 can be. It excites me that if this is what cheap virtual reality is like, just how incredible is expensive virtual reality going to be in a couple of years time.